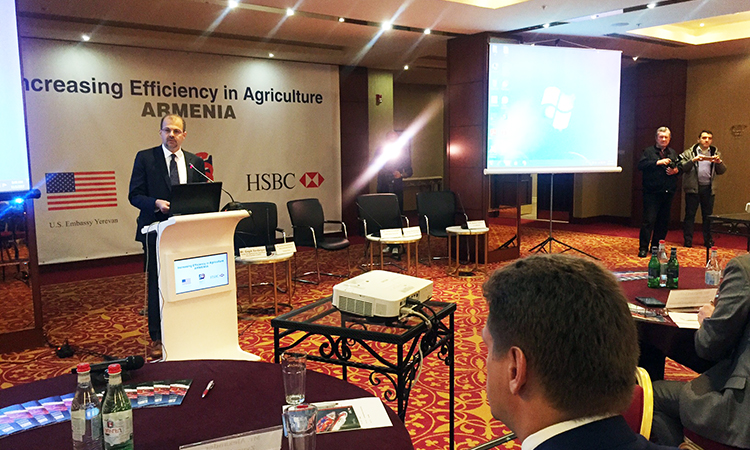 U.S. Embassy and U.S. Foreign Commercial Service Team Up to Support the Agriculture Sector in Armenia

On November 1, the U.S. Embassy in Yerevan, in partnership with the Ministry of Agriculture and HSBC Bank Armenia, organized business conference focused on Armenia’s agriculture sector. The goal was to connect Armenian companies involved in the sector with the expertise, products, and technology of well-known U.S. companies Valmont and Monsanto.

The conference aimed to strengthen commercial ties between the United States and Armenia by connecting representatives from American and Armenian agribusinesses, and by giving American companies the opportunity to showcase the latest technological advances in the field.

“Agriculture is one of the most important sectors of the Armenian economy. It accounts for 19.6% of Armenia’s GDP and employs 36.2 % of Armenia’s labor force,” said Chargé d’Affaires a.i. of the U.S. Embassy Rafik Mansour at the conference opening. “The United States is dedicated to improving the commercial opportunities for both our countries, and to deepening our trade and investment relationship. We can celebrate the fact that bilateral trade in goods between the United States and Armenia is up 35% in the first eight months of this year, according to the U.S. Census Bureau.”

Two U.S. companies – Valmont and Monsanto – sent representatives to the conference to present their products and services and to learn about business opportunities in Armenia. The one-day program also featured presentations by HSBC Bank Armenia, International Finance Corporation (IFC), the Center for Agribusiness and Rural Development (CARD) and Armenian government officials.

The event helped U.S. companies gain a greater understanding of the objectives and priorities of Armenia’s government leaders and businesses, and allowed Armenian businesses to learn about the latest options available to improve yields and add value to their products. The conference was followed by meetings between representatives of U.S. and Armenian companies.