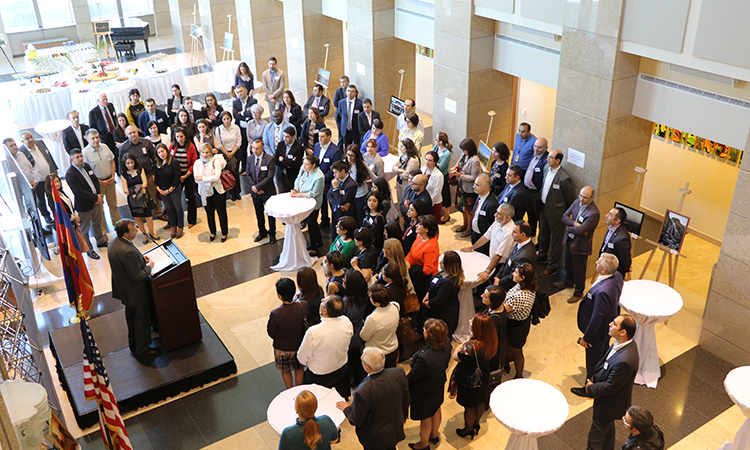 Saying he was humbled to join such a distinguished group of active Armenians, U.S. Ambassador to Armenia Richard Mills, Jr., welcomed to the Embassy in Yerevan some of the 450 Armenian alumni of the U.S. State Department’s Edmund S. Muskie Graduate Fellowship Program.

“When you look around the atrium it is a wonderful site to see so many people, so many dedicated professionals working in a variety of sectors and fields to build a strong and vibrant future for Armenia,” Ambassador Mills told the alumni during a networking reception at the Embassy on Tuesday, May 16. “As the U.S. Ambassador to Armenia it is a great pleasure to know that through the Edmund Muskie Program the U.S. State Department has played a part, even if a small one, in helping you achieve all that you have.”

The Edmund S. Muskie Graduate Fellowship Program promoted academic and professional training for Armenian scholars, focused on recognizing the importance of promoting mutual understanding across cultures while building participants’ leadership skills through exchange internships and study. In addition to helping with professional development, the Muskie Program allowed participants to realize their leadership skills and explore ways in which to implement new ideas and concepts back in Armenia.

Though the Muskie Graduate Fellowship Program which 450 Armenians have taken advantaged of has since ended, the alumni remain an important part of Armenian society, working in high-level government positions, leading businesses, and advancing issues such as environmental awareness and public health.

As the Embassy is celebrating 25 years of U.S.-Armenian diplomatic relations, Ambassador Mills noted how important such alumni are to strengthening the partnership between the two nations.

“I think the many exchange programs, like the Muskie Program, which bring Armenians to the U.S. for study, internship, or cultural exchange, and those programs that bring Americans here to Armenia, are shining examples of the deep and warm relationship that has developed between our two nations over the last 25 years. In your work, bringing the knowledge and skills you learned in the U.S. to help your homeland, you are living examples of the value of our 25 year partnership,” Ambassador Mills said.