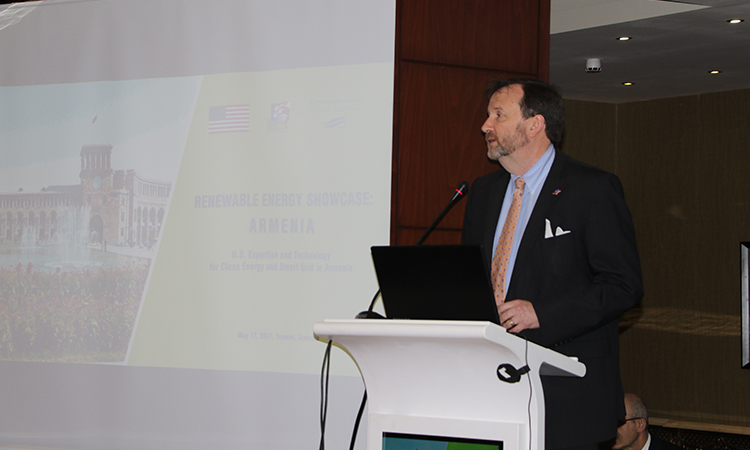 The future of energy is renewable. And it is a future that Armenia can take advantage of, for its pocketbook today and for future generations as well. That was the message of a day-long conference organized by the U.S. Embassy in Yerevan, in partnership with the Ministry of Energy and Natural Resources and the firm Contour Global. They brought together representatives from some of the top U.S. renewable energy companies to meet with 70 Armenian businesses to discuss how they can best partner.

The session on May 17 allowed U.S. companies to detail their expertise and technology for clean energy and smart electric grid development.

“Armenia and its energy sector have grown so much over the last 25 years. I am excited to think about what the next 25 years will bring, knowing that it will be developed through partnerships started here today,” said U.S. Ambassador to Armenia Richard Mills, Jr., who opened the session along with the Deputy Minister of Energy Infrastructures and Natural Resources.

The one-day conference was designed to strengthen the increasing commercial ties between the U.S. and Armenia by introducing leading U.S. companies to Armenian energy sector operators, allowing the American companies to showcase the latest technological advances in the field.

“As many of you know, this year we are marking 25 years of U.S.-Armenian relations. Twenty five years ago, I remember well working on the issues of the newly-independent Armenia at the State Department in Washington, D.C. Those of you old enough remember well that in those early years of independence, Armenia’s energy situation was shaky. Outages were the norm. Trees were clear-cut to provide heat. It was a time of true crisis,” he said. “But Armenia did not surrender to the darkness and scarcity. Instead, with the support of friends and partners like the U.S., Armenia developed into a nation that is able to meet its needs, and in fact able to export its excess electricity.”

He highlighted the valuable work done by the Armenian government to encourage energy diversification and clean energy production, including a Solar Cell Investor Conference it organized in January. And he mentioned how the U.S. has partnered with the Armenian government, describing an exchange trip organized last month for Armenian officials and private sector representatives to visit experts in the U.S. to gain best practices for solar power energy production.

“The Armenian government has been leading the efforts in diversifying the nation’s energy sector into renewables and of boosting energy efficiency programs. They have put into place mechanisms and programs enabling the growth of Armenia’s renewable and solar cell energy sectors,” Ambassador Mills said.  “And as we have for the past 25 years, the U.S. government will continue to be a partner with Armenia.”