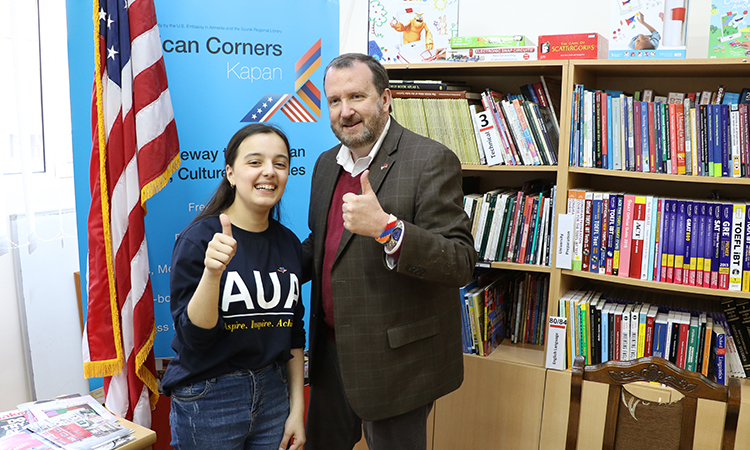 English students, ancient frescos, and handcrafted accessories – when U.S. Ambassador to Armenia Richard Mills, Jr., and his spouse Leigh traveled to Syunik Province this week his agenda was filled with visits to a variety of efforts supported by the U.S. Embassy in Armenia.

“As lovely as Yerevan is, it is always great to get out of the capital and to see all that Armenia has to offer,” Ambassador Mills said. “Armenia is a land of hospitality, of historic sites, of grand vistas, which is why we’re so proud to be working to promote tourism in the regions. Getting tourists outside of Yerevan will help them better understand Armenian culture, and the money they will take with them will help fuel rural economies.”

The trip included stops supported by USAID’s My Armenia project. The five-year My Armenia project, a partnership between USAID and the world-renowned Smithsonian Institution in Washington, DC, is aiming to put Armenia on the map as a world-class tourist destination by developing tourism experiences outside of Yerevan. This means supporting things like the development of cultural sites, museums, wineries, tour guides, festivals, and artisans who sell souvenirs to visitors.

During his Syunik trip, from April 18 to 20, Ambassador Mills and his spouse lunched at the Old Bridge B&B in Yeghegnadzor and met with artisans working with Sisian Ceramics and Astre Accessories in Sisian. Both are small tourism enterprises supported by the My Armenia project.

“It is powerful to stop and visit with some of the entrepreneurs in rural Armenia being helped by USAID’s My Armenia project, to hear their stories and see their success” Ambassador Mills said. “They are building their own futures by following their passion, and I have no doubt they will succeed and help their communities in the process. And as the ambassador, I am proud USAID and the Smithsonian Institution will be there right next to them providing support.”

Another Embassy-supported effort that is helping to draw tourists outside Yerevan is the ten preservation projects supported by the U.S. State Department’s Ambassadors Fund for Cultural Preservation. Since 2001, this fund has provided more than $1 million in funding to efforts to safeguard some of Armenia’s most precious cultural treasures.

On his trip, Ambassador Mills and his wife Leigh visited one of the largest such projects, the preservation efforts currently underway at the St. Hovhannes Church in Meghri. Known for its incredibly rare frescoes which are outstanding examples of Persian-Armenian design, the U.S. government provided $450,000 to rescue and repair this ancient testimonial to Armenia’s role as a bridge between cultures. April 18 was International Monuments Day, when the world celebrates such cultural landmarks by visiting such sites.

Work on the project began last year with the Embassy’s partners AMAP Human Development NGO and the Ministry of Culture. After an in-depth analysis by international experts, it was determined that the continuous humidity inside the church poses a grave risk to any restoration of the frescoes. So, following the experts’ recommendations, a bidding process is now underway to identify a contractor to repair the roof and install a state-of-the-art drainage system. In 2019, when the new drainage system has proven it can eliminate the threat of humidity, the art restoration work will begin.

“The U.S. protects, preserves, and restores cultural treasures in Armenia because they do not just belong to Armenia, they belong to the world. They are part of the shared global culture that makes us human,” Ambassador Mills said in Meghri. “And while we support the preservation of this church as an end in itself, it is also a means to draw more tourists to Meghri and support the local economy.”

Ambassador Mills also visited the Meghri Citizen Office and met with the Mayor of Meghri, Mr. Mkhitar Zakaryan, to discuss the impact of Armenia’s current local government reform, regional economic development, and the benefits of transparent and accountable local governance. The Meghri Citizen Office, established in 2017 with funding from USAID, is a “one-stop shop” that provides a wide array of municipal services to residents of the consolidated Meghri community, including references, permits, and electronic payment of property taxes.

The Citizen Office was established as part of USAID’s broader support to help Armenia implement decentralization and local government reform and strengthen the accountability, effectiveness, and efficiency of local self-government.

“The Citizen Office project is a brilliant example of the power of partnership – of Armenian local and national leaders working jointly with the U.S and international donors,” Ambassador Mills said. “It is at the forefront of helping local leaders respond to citizens’ concerns quickly and efficiently.”

Improved English language skills for local residents is a must if they hope to take full advantage of the increase in tourism predicted thanks to such efforts. To that end, Ambassador Mills visited two Embassy-supported projects promoting English-language skills in Syunik.

The first is a free English course being offered to residents in Meghri. In its sixth year, the program each year helps 60 students and adults improve their English. He also visited the Kapan American Corner, which since its founding in the Syunik Provincial Library has held 1,300 educational and cultural programs to help the city’s residents expand their English skills while learning about the United States.

“English gives you wings,” Ambassador Mills said. “And with our support these students will be able to access the international market, help tourists visit their communities, and have access to U.S. news and educational resources.”