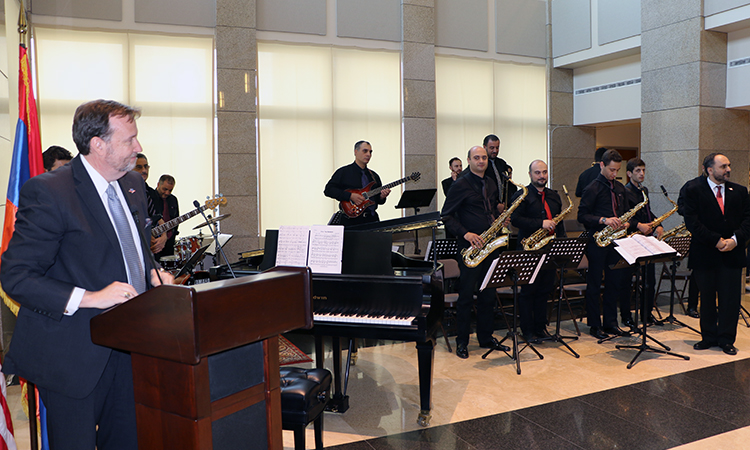 The U.S. Embassy is hitting the road for two weeks in July to connect with Armenians across the country and to showcase the many areas of enduring partnership and shared interests between Armenia and the United States.  The “America on the Road” tour is the centerpiece of our year-long commemoration of the 25th anniversary of diplomatic relations and of sincere friendship between our two countries.

On June 28, U.S. Ambassador to Armenia Richard M. Mills, Jr. announced the launch of this year’s “America on the Road” tour with a reception and concert at the U.S. Embassy in Yerevan. “This is our second ‘America on the Road’ program. We had such a great time connecting with people across Armenia in 2015 that we decided to do it again. We will launch our two-week, eight-city tour on July 1, with a free, open-air concert at the Cafesjian Sculpture Garden here in Yerevan. We will then visit Gyumri, Vanadzor, Ijevan, Meghri, Kapan, Goris, and Sisian,” said Ambassador Mills.

One of the cornerstones of the “America on the Road” tour is a varied cultural program with jazz concerts, American film screenings, and book readings in all the regional cities and towns. The U.S. Embassy has partnered with the Armenian State Jazz Band, under the artistic direction of Armen Hyusnunts, to offer an evening performance in each location, as well as master classes with local music students. Some of the concerts will feature Michael Mayo, an acclaimed American jazz musician brought to Armenia by the Embassy. The film screenings, organized by Melik Karapetyan and the Forum Theater NGO, bring some of the best and most popular of the feature films from the Embassy’s 2017 American Film Showcase to audiences in all seven of the regional cities.  When shown in Yerevan earlier this year, these films were welcomed with packed theaters.

While on the road, the U.S. Embassy will also showcase programs, sites, and individuals who have partnered with USAID, Peace Corps, and the Embassy since 1992. Ambassador Mills emphasized that “we will celebrate their achievements and the very real difference they made in the lives of countless Armenians, in support of our shared goal of a prosperous and democratic Armenia. As we do so, we will not only be looking back on the last 25 years of successful partnership, but also looking ahead to the future. The cooperation and sincere friendship between our two nations is strong and enduring. We want to showcase that partnership, and the ties that unite us, during this year’s tour.”