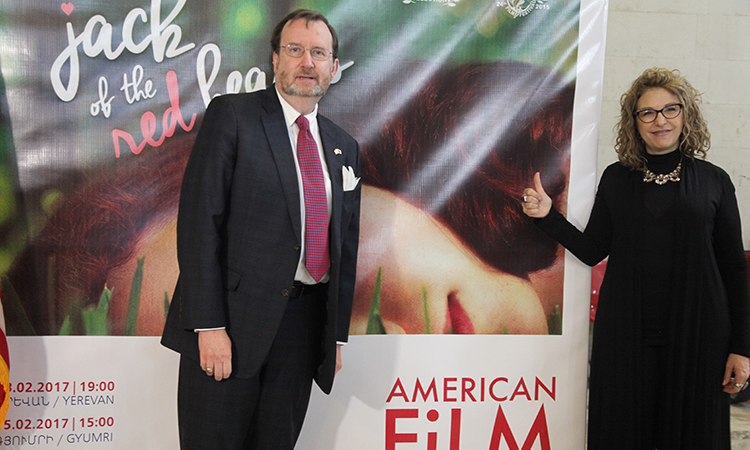 When the lights go down and a film flickers to life on the movie theater screen, we are quickly transported to a different time and place. Through film we can hear others’ stories and walk in their footsteps. Highlighting the transformative power of movies and filmmaking, the U.S. Embassy in Yerevan opened its “Mosaic of Human Stories” American Film Showcase – a two-month program featuring 33 American films – with a gala screening of the award-winning “Jack of the Red Hearts” on February 13 at the Moscow Cinema.

“Movies transport us to new worlds, open our eyes to different perspectives,  and give us a better understanding of the larger world around us, ” said U.S. Ambassador to Armenia Richard Mills, Jr. in his opening remarks.

Janet Grillo, an award-winning filmmaker/producer and the director of “Jack of the Red Hearts,” is visiting Armenia for one week to participate in the launch of the American Film Showcase, engage with Armenian audiences, discuss filmmaking with student groups, and share her experiences with autism.  At the opening, Ms. Grillo led a question-and-answer discussion with the members of the audience following the screening of her film, which tells the story of a tough teenage runaway who impersonates a trained caregiver and forms a unique bond with an 11 year-old autistic girl and her family.

The American Film Showcase runs through March 31 and features both documentary and feature films, which will be shown in Yerevan, Gyumri, and Vanadzor.  Other movies to be screened as part of the Showcase deal with topics such as disabilities, online bullying, environmental protection, the gender gap in computer programing, and the ties between food and culture. All screenings are open the public and free, with seats available on a first-come, first-served basis. A complete schedule can be found online at www.usa.am/announce/AFSArmenia.

Along with film screenings, the “Mosaic of Human Stories” American Film Showcase includes a week-long training session on film editing for Armenian documentary filmmakers with Doug Blush, an Oscar award-winning film editor, as well as an award-winning director, producer, writer and cinematographer.

“Armenians have so many moving stories to tell, and I think it is wonderful that our guests will be spending so much time with young Armenian filmmakers,” Ambassador Mills said. “By strengthening the skills of these filmmakers, we hope to help give a stronger voice to the next generation of Armenian artists so they can share their stories with wider domestic and international audiences.”