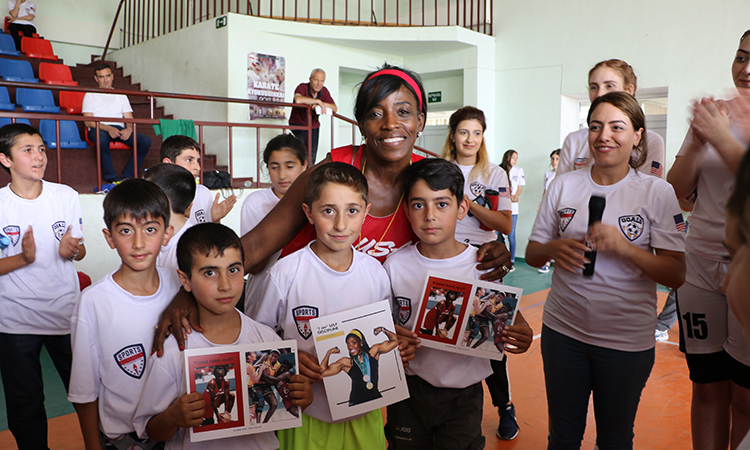 The United States and Armenia both share a love and passion for sports, and in the spirit of sports diplomacy the U.S. Embassy in Armenia brought two professional basketball legends, Ruthie Bolton and Shari Sam, to Armenia for a series of workshops and training camps to help Armenian youth and coaches improve their basketball skills and develop as leaders.

Both of the visiting basketball stars played for the WNBA, the women’s professional basketball league in the United States.

Ruthie Bolton is one of the most accomplished female athletes in the world.  A two-time Olympic gold medalist, she was the star player on the WNBA team the Sacramento Monarchs from 1997 through 2004.  She also served as a first lieutenant in the U.S. Army Reserves and is the author of several inspirational books in which she shares her story of empowerment.

Sheri Sam played for a number of WNBA teams, including the Orlando Miracle, the Miami Sol, the Minnesota Lynx, the Seattle Storm, the Charlotte Sting, the Indiana Fever, and the Detroit Shock.  Her skills helped several of the teams reach the playoffs and win championships.  A WNBA All-Star, she is ranked in the top 50 of all-time in several categories.  Most recently, she has been an assistant coach at Eastern Illinois University.

While in Armenia the two are leading a series of workshops for young Armenian boys and girls from several rural communities, helping them develop their skills to become better basketball players.  They will also be coaching them on how to develop their self-esteem and motivation, and encouraging them to become leaders on their teams and in their communities.

Along with working with young Armenians, the visiting U.S. basketball legends will also spend time leading masterclasses for Armenian coaches, sharing their experiences of using sports as a motivational force for good in the community.

The U.S. Embassy arranged the trip through the U.S. Government’s Sports Envoy Program, administered by the U.S. State Department, which sends American athletes abroad to hold sports clinics for young people and coaches, participate in community activities, and engage youth in a dialogue on the importance of leadership and respect for diversity.