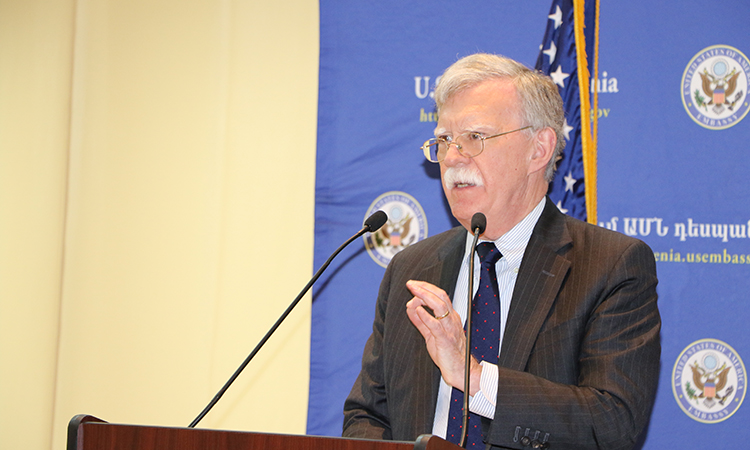 Ambassador Bolton: Thank you very much, Sarah. It’s a great pleasure to be here and thanks to all of you for coming today. I understand I am the first U.S. National Security Advisor to come since 1997 so I am particularly happy to be here and was very grateful to the Prime Minister for meeting for about an hour and twenty minutes. And the Defense Minister and the Foreign Minister, and the National Security Adviser with whom I met for a comparable period of time beforehand. I stressed to the Prime Minister and to the others that the United States views the U.S.-Armenian relationship as being a top priority. This is region that’s strategically important to the United States. We would be eager to help out in resolution of the Nagorno-Karabakh conflict both through our continuing role as Co-Chair of the Minsk Group but also in any way we can behind the scenes because I think that resolution of the conflict would obviously not only benefit Armenia and Azerbaijan, we think it would be in the best interest of the United States as well. We talked about the conversations that I had in Russia on Monday and Tuesday on arms control and a range of other issues. We talked about the coming final imposition of U.S. sanctions on Iran and how that would affect Armenia. We talked obviously about the general circumstances in the region including conflict in Syria and Iraq and we talked about potential increase, the U.S.-Armenian economic interchanges, the importance of finding ways to encourage more direct American investment in Armenia and generally strengthening U.S.-Armenia relations. So with that I’d be happy to try and answer to your questions.

RFE/RL: I want to ask you one question because we have video opportunity now and my question is about your meeting with the Prime Minister. We are now in a new situation, you are dealing now with a new government. What’s your take on the velvet revolution? Does it have a future and what’s your impression on Prime Minister and are you optimistic for the future of Armenia?

Ambassador Bolton: Well, we talked about a number of things, as I mentioned. We talked about the upcoming election in December and how a number of steps would have to be postponed until after the election but given what the public opinion polls here show and what the prospects are if those predictions turn out to be true, the Prime Minister will have a very strong mandate and be in the position to make a number of very decisive steps. I did ask him what his secret was in those polls but he wouldn’t tell me. Maybe he will tell us after the election. But it is a fact that, if the predictions come true, he will have a very strong mandate and that is the most opportune moment to take strong action in number of different respects and if, as I appreciate from what I have learned in the meetings today, including meetings with a group of Armenian think tank leaders, the resolution of Nagorno-Karabakh is the primary issue on the Armenian political agenda. There is no better time than to try and take decisive action than right after that election.

Public Radio: On all aspects, on all discussions referring to the resolution of Nagorno-Karabakh issues there is this formula “territories in return for promises.” But what can be the guarantees for the security of Armenia in that situation. And I would like to refer to some statements by President Aliyev who was even making some claims about Yerevan. Back in 1915 when the genocide was happening, the world was just silently watching what was going on.

Ambassador Bolton: Well, the solution to the conflict is obviously difficult. If it were easy, it would have been resolved already. And I don’t think, it certainly was not my intention to come here with the change in U.S. policy or new suggestions, but really to learn more about the way things stand, and I think it’s up to the parties themselves to try and find the accommodation. As I said to the think tank leaders earlier, one of my former bosses Jim Baker always used to say – with respect to another long-standing dispute – Jim Baker used to say “We can’t want peace more than the parties themselves” and I think that’s applicable here too. I will say, from Armenia’s point of view, the surest way to reduce excessive outside influence in Armenia is to reach a resolution on Nagorno-Karabakh.

Armenia TV: My question refers to the Freedom Support Act, Article 107, so there has been a waiver to this article for 17 years, but that was obviously with the condition that it wouldn’t be harmful to Armenia. So this year again, there might be a waiver by President Trump and this might allow sale of arms to Azerbaijan. And if that would happen in that case, is it possible also to be sure that parity, and allow sale of arms to Armenia in a smaller amounts?

Ambassador Bolton: It’s Section 907, that’s the one. Look, there’s no decision, I’m not presaging any decision for increased sales to either side. But it’s clear that the overwhelming bulk of Armenia’s purchases of arms come from Russia and I understand that something over 80% of Azerbaijan’s purchase of arms comes from Russia. Now, that circumstance has clearly not contributed to a resolution of the dispute, because of the enormous leverage it gives Russia over both parties, and yet it does not produce peace. So, you know, we’re Americans, we believe in competition as a spur to improvement, and our military equipment is better than the Russians’ in all cases. So I think this is something we should consider, consistent with our statutory framework.

Para TV: What’s the approach, position of the United States on humanitarian assistance, through the Armenian Ministry of Defense, to Syria?

Ambassador Bolton: Well, this was a subject that I discussed with the President and his advisors this morning. I told him that in the case of the United States we were providing extensive humanitarian assistance but we were trying to do it in a way that did not affect the political relationships inside Syria, that we wanted to avoid aiding terrorists on the one hand or the regime on the other, that we felt that any important long-term humanitarian assistance and reconstruction should depend on progress toward a political resolution in Syria. The President said this was not going to be military assistance, it would be purely humanitarian, and I think that’s important. It would be a mistake for anybody else to get involved militarily in the Syrian conflict at the moment. There are already almost, by different counts, seven or eight different combatant sides and to get involved with any one of them for any other country would be a mistake.

Ambassador Bolton: Well, I wouldn’t want to pre-judge that, what I heard here, stressed very strongly, was that Armenia felt that the discussion should be in the context of the Minsk Group, and that remains very satisfactory from our point of view. There have been a lot of previous discussions so there are a lot of things that can be put on the table, again I go back to the way Jim Baker used to approach this, which is that the sides sit down and there are no restrictions on what they say, just because they say it doesn’t mean it has to be discussed, but everybody should feel free to speak about what’s on their mind, and then see where it goes from there. And think, just to return to the point I made at the outset, that if the Prime Minister is elected, his party receives the level of support that’s indicated, it’s an opportunity for decisive steps to be taken. And I wouldn’t want to prejudge what he might decide to do, but I would hope if the desire is to reach an agreement, that he is prepared to do it and I would hope that the Azerbaijani side feels the same way. So thank you very much for coming, it was great to be here. Thank you very much.