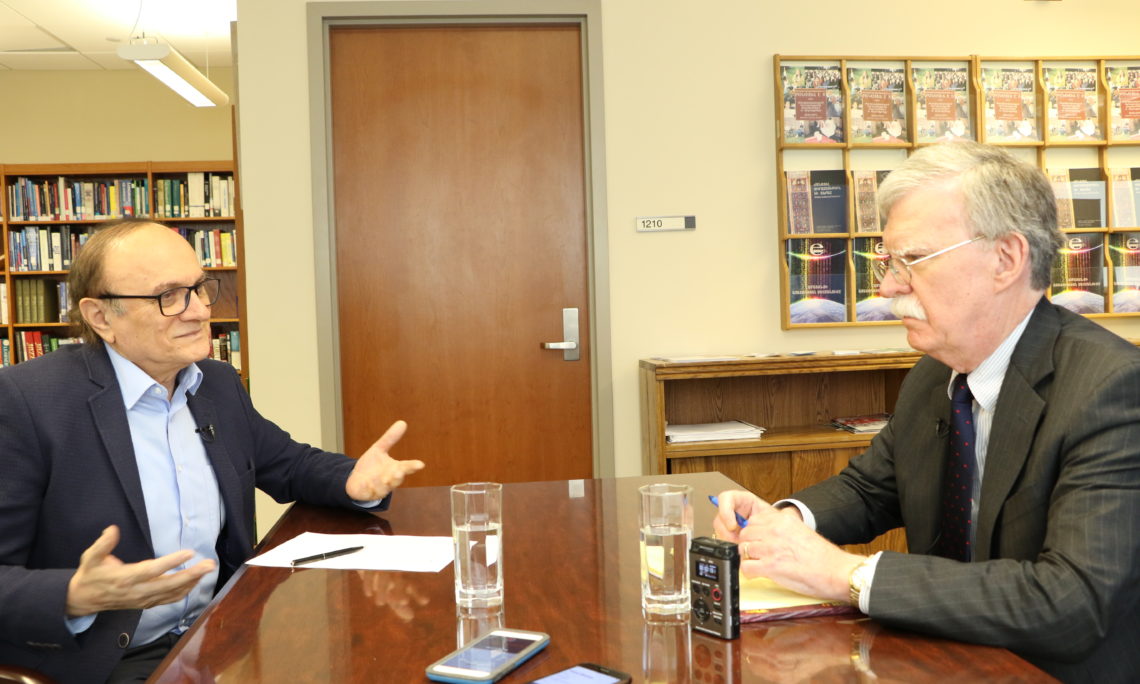 Harry Tamrazyan, RFE/RL: So, Mr. Bolton, we know that you just came up from the meeting with the Prime Minister of Armenia. Can you share with us what has been discussed and what’s your impression of the new government?

Ambassador Bolton: Well, we discussed a very wide range of subjects and, what I said to the Prime Minister was, obviously very exciting time for Armenia with the changes from the spring and elections coming up in December and when you have that kind of change, revolutionary, really, it always provides opportunities to resolve problems that perhaps in the past had seemed intractable. So we talked obviously a lot about Nagorno-Karabakh, we talked about the Minsk process and the important role of the U.S.’s co-chair. We talked about Russia, Turkey, Iran, Georgia. And I stressed to the Prime Minister that the United States, the Trump Administration considered the U.S. relations with Armenia to be of very high priority, we wanted to be of whatever assistance we could be behind the scenes, as well as one of the co-chairs of the Minsk Group, to see if we could help facilitate a solution between Armenia and Azerbaijan that would be mutually agreeable to both and that we recognize the obvious difficulties there but we just felt that the Prime Minister was in an excellent position here in Armenia and would be after the elections to show leadership on that.

RFE/RL: Now the follow-up question on the comments that you just made. It seems to me that approval rating is very high here…

Ambassador Bolton: I asked him what his secret was.

RFE/RL: But are you going to help this government, this new government to strengthen democratic institutions and to attract perhaps some U.S. investments into Armenia? And are there any concrete suggestions, proposals, offers to share with us?

Ambassador Bolton: Well, we did talk specifically about the prospect of increased American direct investment in Armenia. I said to him and to his advisers, in the earlier meeting with the Foreign Minister, Defense Minister, the National Security Adviser, that there is a very strong American community of Armenian citizens, Armenian-American citizens and that I thought the prospects for closer economic cooperation, really in the private sector, which is much better for the long term than government to government assistance, were very real. So there are a number of things that we want to look at there, and I would be hopeful that we could get something going because I think the more Armenia is open to the outside world and not confined within the borders it has here, especially in the age of the internet, it ought to be possible to get beyond some of the border issues and that perhaps American investment might be a way to help facilitate that.

RFE/RL: Mr. Bolton, I am just going to ask you a philosophical question since I know that you are also like, I would consider you as a philosopher as well. So what is your take about this velvet revolution? What just happened in Armenia? Does it have future? We know that Russia holds huge influence in this region and there are some concerns about the sovereignty of these nations, including Armenia, Georgia, and others.

Ambassador Bolton: Well, I think the prospects for a more stable democracy here are excellent and I think that’s really fundamental to Armenia exercising its full sovereignty and not being dependent on or subject to excessive foreign influence. I think that it’s better for the people here to have more opportunities internationally and not to be constrained by historical patterns. So from the U.S. perspective, the more democracy there is, the greater the chance for contact with the United States and other countries that share those same values.

Ambassador Bolton: Well, I think there are a lot of other alternatives, including in the area of weapons sales. We have restrictions Congress has imposed on the United States in terms of sales to Azerbaijan and Armenia because of the conflict, but there are exceptions to that and, you know, as I said to the Prime Minister, if it’s a question of buying Russian military equipment versus buying U.S. military equipment, we’d prefer the latter. We think our equipment is better than the Russians’ anyway. So we want to look at that and, you know, I think it increases Armenia’s options when it’s not entirely dependent on one major power. I understand the geographical situation and the historical antecedents to all this, but I think this is a time to be optimistic that Armenia can emerge more on the world stage. The U.S. considers the South Caucuses a very important area strategically, and so improving our relations with Armenia is a very high priority for the Administration.

RFE/RL: On the other hand, we are like circled with, you know, the countries that are blocking to this day Armenia. Like we know with Azerbaijan, it’s because of the conflict; Turkey also because they are very close with Azerbaijan, they also block Armenia; and we know that Iran, we have the largest neighbor here, Iran, but U.S. is imposing sanctions. And how do you, what are the options for Armenia? And on the other hand, Russia is also like becoming a target of these sanctions and Russia is huge neighbor and you know good market for Armenia. And Iran is under sanctions, Russia is under sanctions. What’s..? How you would…?

Ambassador Bolton: I think what the current circumstances highlight is the importance of finding a mutually satisfactory agreement to the Nagorno-Karabakh issue because once that happens, then the Armenian-Azerbaijani border would open, the Turkish border, I believe, would almost certainly open. I think the border with Georgia might be less subject to concern about what pressure the Russians may be putting them under. The Iranian border is going to be a significant issue because, as I explained to the Prime Minister, we want to put maximum pressure on Iran because it has not given up the pursue of nuclear weapons, it remains the world’s central bank of international terrorism, and we are concerned about its ballistic missile programs and its active conventional military operations in Syria and Iraq and elsewhere. Obviously, we don’t want to cause damage to our friends in the process, so I think conversation between the Government of Armenia and the United States is going to be very important. But, as I stressed to the Prime Minister, we are going to enforce these sanctions very vigorously. This is not the Obama Administration. We are going to squeeze Iran because we think their behavior in the Middle East and really globally is malign and needs to be changed.

RFE/RL: You met also Vladimir Putin, and the entire world was, you know, showing your footage meeting with Putin. There were some funny parts of it, and you were laughing, both of you. And how the meeting went? Was there any progress there in terms of U.S.-Russia relationship? Or sanctions will go ahead in full strength?

Ambassador Bolton: Well, we discussed a whole range of issues. It was a follow-up to the meeting of President Trump with President Putin in Helsinki, and I met with my Russian counterpart in Geneva in August. This was coming back to Moscow so I also had the opportunity to meet with Foreign Minister, Defense Minister and of course with President Putin. And we had an hour and a half discussion, it was very professional, very extensive. President Putin is himself an expert on arms control, so we had a long discussion about the INF Treaty and the reasons for American withdrawal that President Trump articulated. We talked about other arms control agreements, the strategic relationship between the two countries. We covered several aspects of the conflicts in the Middle East, Iran, and the nuclear weapons program in North Korea. And I think these are the kinds of things that are helpful because I am convinced that Russia approaches foreign policy on the basis of its national interests, and I think we have success with Russia when both sides are straightforward about what their national interests are. Sometimes we’re simply not going to be able to reach agreement but other times as we talk about some of these issues, we can. So we are hoping that the next meeting between the two presidents might come in Paris at the time of the Armistice Day Parade, there are other opportunities and I extended President Trump’s invitation to President Putin to visit Washington after the first of the year.

RFE/RL: And last question. We know that your wife worked for RFE/RL, and you are like part of RFE/RL family. What do you know about RFE/RL? What’s your take on our mission?

Ambassador Bolton: Well, I think it remains a critical mission today in many, many respects, I think we could devote more resources to it. It’s very important to get, to spread awareness of what the U.S. position is on issues and to have an idea of what’s happening in the United States and how it affects other parts of the world. We’re faced in many areas with very active propaganda campaigns by other nations. That’s not what RFE/RL is. It’s in the spirit of the American media, it gives all sides of the story, and that’s the way we are as a country and I think that shows to people around the world that we are not afraid of discussion and debate but we are determined to oppose propaganda.

RFE/RL: Thank you very much.

Ambassador Bolton: Thank you very much.

RFE/RL: It was really great.

Ambassador Bolton: Nice talking with you.