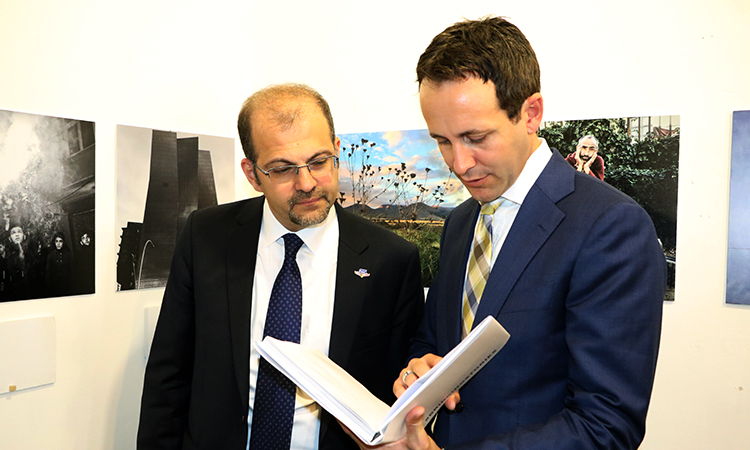 Photos of everyday events and shared common memories, captured on both sides of a closed border by young Armenian and Turkish photographers, are available in a powerful photo book called “#BridgingStories.”  The book was launched on September 26 in Yerevan, bringing together the mentors and several of the young photographers whose work is included in the volume.  It is the capstone of a U.S. Embassy-sponsored project that included a photojournalism camp and exhibit last summer with the same name, #BridgingStories, aimed at bringing young Armenian and Turkish photographers together to develop their photojournalism skills.

Twenty-four young Armenian and Turkish journalists gathered in Dilijan in August 2016 for intensive training led by international and local experts, including Armenian photojournalist Anush Babajanyan, Turkish photojournalist Serra Akcan, and American National Geographic photographer John Stanmeyer.  Participants then returned to their homes and spent months photographing their communities, working closely with their mentors.  Many of the photos were displayed in an exhibit last January at the NPAK/ACCEA gallery in Yerevan.

“The photos they took, some of which are compiled here, are powerful visual stories.  They show life as it is – the good and the bad, the joyful and sorrowful, the poignant and the day-to-day,” U.S. Ambassador to Armenia Richard Mills, Jr., writes in the opening pages of the newly released book.  “The young photographers share stories of their families, their communities, and their own lives.  Through their visual stories we see the similarities in the lives lived on both sides of the Armenian-Turkish border.”

“But, of course, an exhibition can only reach so many eyes.  Expanding on the project, and again with the support of the U.S. Embassy in Yerevan, this #BridgingStories book was created, a permanent record of the development of a relationship between neighbors who are now friends,” mentor John Stanmeyer writes in the book’s introduction.

“Thank you to all the young photographers involved,” said U.S. Embassy Chargé d’Affaires Rafik Mansour, who spoke at the book launch.  “It is through your art, through your eyes, that we can see bridges of understanding being built.  And with this book, your work will continue to reach new audiences and spark new discussions.”

Copies of the book will be made available to various libraries around Armenia.  Look for them soon in the U.S. Embassy’s five American Corners in Yerevan, Gyumri, Vanadzor, Charentsavan, and Kapan.