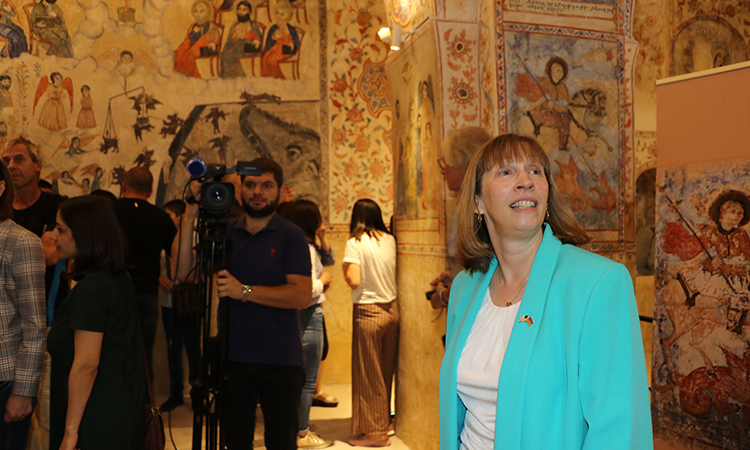 On September 17, 2019, U.S. Ambassador Lynne M. Tracy joined Deputy Minister of Education, Science, Culture and Sport Narine Khachaturyan, representatives of the Syunik region and the Meghri community to celebrate the completion of a U.S.-funded cultural preservation project in Meghri.  The project was funded by a $510,000 grant through the U.S. Ambassadors Fund for Cultural Preservation (AFCP), making it the largest AFCP restoration project ever undertaken in Armenia.  Launched three years ago, the project involved the preservation of the most critically endangered parts of the St. Hovhannes Church and the restoration of its rare, 17th century frescoes, painted in the unique, Persian-Armenian style.

The U.S. Embassy partnered with the Ministry of Education, Science, Culture, and Sport as well as the AMAP Human Development NGO to realize the project.  Preservation work began with thorough research of the area and the building, then continued with the installation of water drainage systems, replacement of the roof, installation of a ventilation system, and improvements to the road leading to the church.  Meanwhile, a professional team of specialists restored the entire fresco interior.

“The United States government and the American people greatly respect Armenia’s rich history and heritage, and I am honored we could help restore and preserve the St. Hovhannes Church,” Ambassador Tracy said in her remarks.  “Projects like this allow future generations to learn about the roots of Armenian culture, and the United States is proud to have been able to provide more than one million dollars since 2005 to support the preservation of this culture through the Ambassadors Fund.”

During her visit to the site, Ambassador Tracy toured the church and observed firsthand the results of years of meticulous work.  Though the Meghri project is complete, the U.S. government’s commitment to working with Armenian partners to preserve Armenian cultural sites for future generations remains.  During the Meghri event, Ambassador Tracy officially announced a new AFCP project – the preservation of the Sanahin Monastery complex in Lori Province.  The United States will provide $100,000 for the completion of this project, which will begin later this year.

The U.S. State Department established the U.S. Ambassadors Fund for Cultural Preservation in 2000, recognizing that celebrating our shared cultural heritage is a way to bring countries and peoples together.  AFCP has been providing support for Armenian cultural sites since 2005, funding projects such as the mapping and cataloging of items at the Noratus medieval cemetery and its collection of khachkars, preservation of a medieval masonry bridge in the Garni Gorge, preservation of the Areni cave, and documentation of traditional Armenian music and dance.