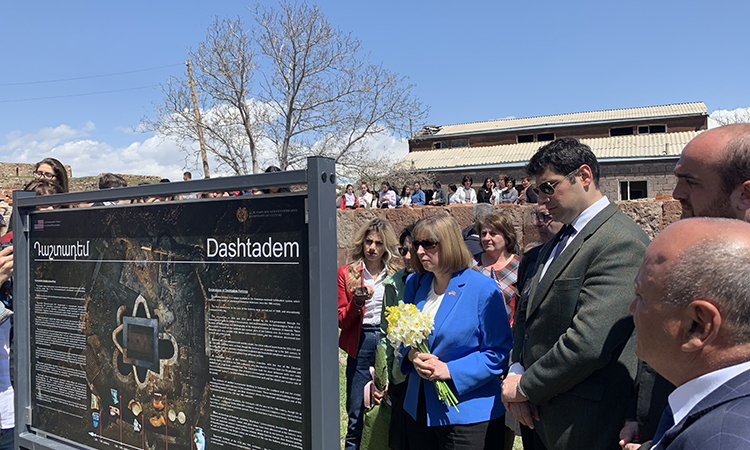 On April 30, 2019, U.S. Ambassador Lynne M. Tracy joined Deputy Minister of Culture Tigran Galstyan to celebrate the completion of a U.S.-funded cultural preservation project in Dashtadem.  The project, funded by a $143,175 grant through the U.S. Ambassadors Fund for Cultural Preservation (AFCP), involved the excavation and partial restoration of the Dashtadem Fortress complex.

One of the largest medieval fortresses in the Caucasus, the site has great historical and architectural significance.  It is home to the seventh century Saint Sargis Church, the twelfth century Khan Palace, and ninth century Christian gravestones.  This restoration phase is a continuation of a previous U.S. government-funded AFCP project at the fortress in 2015.

The U.S. Embassy partnered with the Ministry of Culture and the AMAP Human Development NGO to realize the project.  During their visit to the site, Ambassador Tracy and Deputy Minister Galstyan toured the fortress and observed firsthand the results of several years of meticulous work.

“Armenia has a rich and multifaceted history throughout which different cultural eras intertwined to create a unique Armenian heritage,” Ambassador Tracy said.  “The Embassy is honored to be able to play a role in restoring and preserving sites like the Dashtadem Fortress so that future generations can learn about the roots of modern Armenian culture.”

As a result of the U.S. government grant, experts were able to stabilize and preserve the inner surrounding wall of the fortress, which provides a better understanding of its original shape and of the structures that made up the center of the compound.  A previous project, also funded by the U.S. government through the AFCP, prepared the site for this phase by clearing the compound of rubbish and remnants of modern structures and allowing for excavation work around the citadel and the inner surrounding wall.

The U.S. State Department established the U.S. Ambassadors Fund for Cultural Preservation in 2000, recognizing that celebrating our shared cultural heritage is a way to bring countries and peoples together.  AFCP has been providing support for Armenian cultural sites since 2005, funding projects such as the mapping and cataloging of items at the Noratus medieval cemetery and its collection of khachkars, preservation of a medieval masonry bridge in the Garni Gorge, preservation of the Areni cave, and documentation of traditional Armenian music and dance.