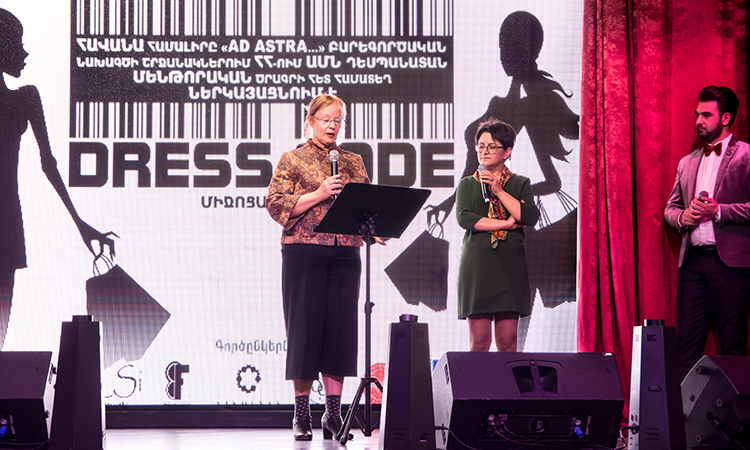 The Dress Code event was organized within the framework of the year-long Women’s Mentoring Program sponsored by the U.S. Embassy, in partnership with the School of Political Science and International Affairs of the American University of Armenia and the Women and Youth Support Development Center.  The event was opened by Ms. Leigh Carter, wife of U.S. Ambassador Richard M. Mills, Jr., and attended by dozens of the 62 mentees benefitting from this year’s mentoring program.

The main objective of the event was to highlight dress code basics to the young mentees, helping them differentiate between casual, business/smart casual, and cocktail attire, ensuring that as future professionals they will understand official or implied dress code rules and be able to make appropriate fashion choices based on the occasion.  During the event, models presented sample outfits illustrating each of these styles of dress, including cocktail dresses by Armenian designers Lilit Margaryan, Aram Nikolyan, Liana Sargsyan, and Lilit Melikyan.

The U.S. Embassy and AUA first established the Women’s Mentoring Program in 2010. Mentors provide career advice, share their personal experiences, and serve as role models to promising young students. This year, 61 Armenian women from a variety of professional fields are mentoring 62 female students from different universities, as well as students from the “Houso Aygi” Young Women Charitable Foundation and the Mer Doon Organization.