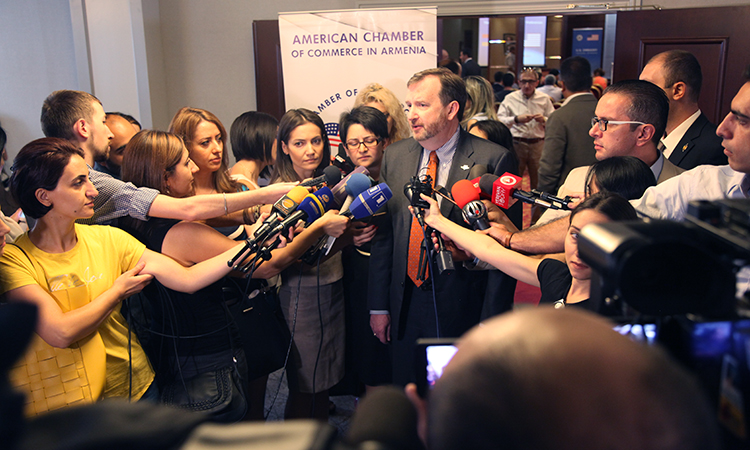 On September 13, Ed Gresser, the Assistant United States Trade Representative for Trade Policy and Economics, led a discussion with Armenian officials and business leaders on how to boost Armenia’s exports to the United States.  By utilizing the Generalized System of Preferences (GSP) program, Armenian companies can take advantage of preferential duty-free access to the U.S market.

At a conference hosted by the American Chamber of Commerce, in cooperation with the U.S. Embassy in Yerevan, U.S. trade representatives discussed export opportunities with the Armenian business community.  This is the second conference in Armenia focused on GSP, building on a 2016 discussion on the subject facilitated by GSP Director Aimee Larsen.  These GSP meetings are an outcome of the U.S. government’s commitments under the U.S.-Armenia Council on Trade and Investment.

In his remarks, U.S. Ambassador Richard Mills underscored that the goal of the U.S. delegation is to demonstrate real results for U.S.-Armenia trade relations by raising awareness in the Armenian business community about the benefits of GSP.  “We hear from many Armenian businesses leaders that they don’t know about GSP and don’t know enough about who is qualified and how it works.  The delegation is here with us today to share information on how Armenia can unlock its export potential to the United States by fully utilizing GSP,” Ambassador Mills noted.

Established by the Trade Act of 1974, GSP is a U.S. trade program designed to promote economic growth in the developing world.  GSP provides preferential duty-free entry for up to 3,451 products from 129 designated beneficiary countries and territories, including Armenia.  As a beneficiary country, the majority of U.S. imports from Armenia entered the United States under the GSP program from 2012-2016.  Current Armenian exports to the United States through GSP are valued at $25 million.  Products range from aluminum foil (accounting for 75% of GSP imports) and precious metal jewelry to fermented beverages and cherry jam.

For more information on the GSP program, visit: https://am.usembassy.gov/business/getting-started-usa/