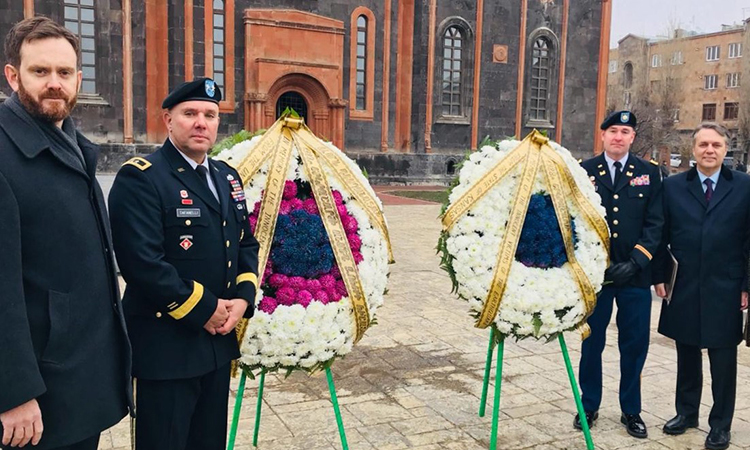 This week the U.S. Embassy was pleased to welcome to Armenia a delegation from the U.S. state of Kansas headed by Governor Jeff Colyer and the Adjutant General of Kansas, Major General Lee Tafanelli.  The delegation traveled to Armenia to commemorate the 30th anniversary of the devastating Spitak earthquake and to pay their respects to the Armenian people.

During his visit, Governor Colyer presented the Armenian Government with proclamations designating December 6, 2018, as Kansas-Armenia Partnership Day and December 7, 2018, as Spitak Remembrance Day in the state of Kansas.  The Governor’s relationship with Armenia dates back to 1988, when as a White House Fellow with the USAID Office of Foreign Disaster Assistance, he was part of one of the first U.S. assistance teams on the ground in Armenia, providing food and supplies to survivors of the earthquake.

On Friday, the delegation was honored to participate in the “Disaster Resistance Day” events in Gyumri, dedicated to the 30th anniversary of the Spitak earthquake, and to place a wreath on the Memorial of the Innocent Citizens.

The delegation also traveled to Vanadzor to meet the family of an Armenian high school student, Emilya Nazinyan, who is currently studying in the state of Kansas as part of the Embassy’s Future Leaders Exchange Program (FLEX).  The Governor was pleased to be able to deliver a package to the family from Ms. Nazinyan, and to bring a package back to her in return – understanding the importance of maintaining that family connection even from thousands of miles away.

General Tafanelli oversees the Kansas Army and Air National Guard, which celebrated the 15th anniversary of its partnership with Armenia earlier this year.  Since the beginning of the partnership in 2003, the Republic of Armenia and the state of Kansas have engaged in a number of military, emergency preparedness, law enforcement, business, medical, public health, educational and humanitarian exchanges.