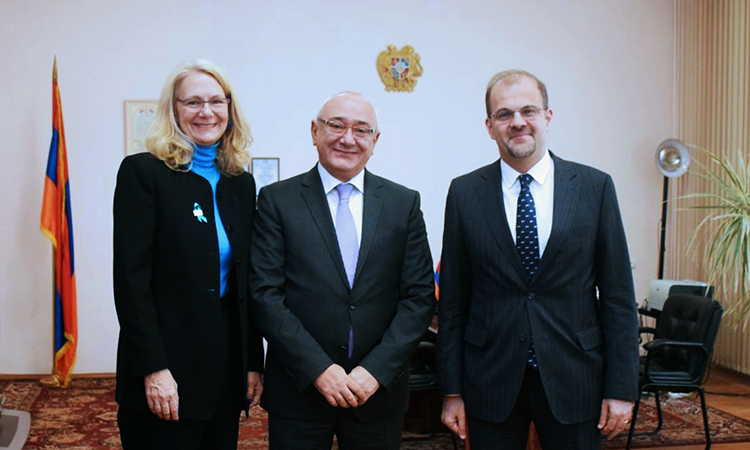 On November 21, U.S. Embassy Chargé d’Affaires Rafik Mansour and U.S. Agency for International Development (USAID) Armenia Mission Director Deborah Grieser met with Chairman of the Central Electoral Commission (CEC) of Armenia Tigran Mukuchyan. The parties discussed U.S. assistance and collaboration with the Government of Armenia ahead of the December 9 parliamentary elections, including the September 2018 signing of an $8 million, four-year agreement to support the integrity of Armenian elections.

This new $8 million agreement builds on the more than $640,000 that USAID already provided in June to assist the Armenian Government in its transition, including support of parliamentary elections, funding independent public opinion research, strategic communication training, and technical expertise on election observation for civil society groups.

“The U.S. government’s ongoing and long-term assistance to electoral and political processes shows our commitment to a strong partnership with the Armenian government,” Chargé d’Affaires Mansour said. “I am happy that USAID has been able to provide timely support to the Central Electoral Commission and the Government of Armenia, both during Yerevan’s municipal elections in September and in preparation for the upcoming parliamentary elections.”

The U.S. Government, through a partnership with the International Federation for Electoral Systems (IFES), is also supporting the CEC to promote the integrity of elections by assisting with the training of election officials and developing voter education materials and public service announcements. Participants will then train election officers in 2,000 Precinct Election Commissions across Armenia to facilitate the smooth and successful administration of the elections.

“We are committed to partnering with local institutions to strengthen their capacity so they can work effectively when our assistance is no longer needed,” Grieser said. “USAID will continue to collaborate with the CEC and support Armenia’s long-term electoral reform goals. We will closely coordinate with other donors to ensure comprehensive and complementary assistance that benefits all Armenians.”

In September 2018, USAID signed an $8 million, four-year agreement with its partners, the International Federation for Electoral Systems (IFES), the National Democratic Institute (NDI) and the International Republican Institute (IRI). Through this partnership, the “Strengthening Elections and Political Processes in Armenia” project will support the efforts of the Government of Armenia, political parties, and the National Assembly to be more responsive to citizens’ needs and expectations.

The Strengthening Electoral Processes and Political Accountability in Armenia is a four-year project (2018-2022), funded by the United States Agency for International Development (USAID) and implemented by the Consortium for Elections and Political Process Strengthening (CEPPS). Working with stakeholders in the government, parliament, political parties, and civil society of Armenia, the project helps promote the integrity of elections through the professional development of election administration, fostering broader citizen engagement in elections and political processes, supporting civil society and media to provide an oversight of the election process, and promoting competitive politics that are responsive to citizen needs. CEPPS partners include the International Federation for Electoral Systems (IFES), the International Republican Institute (IRI), and the National Democratic Institute (NDI).