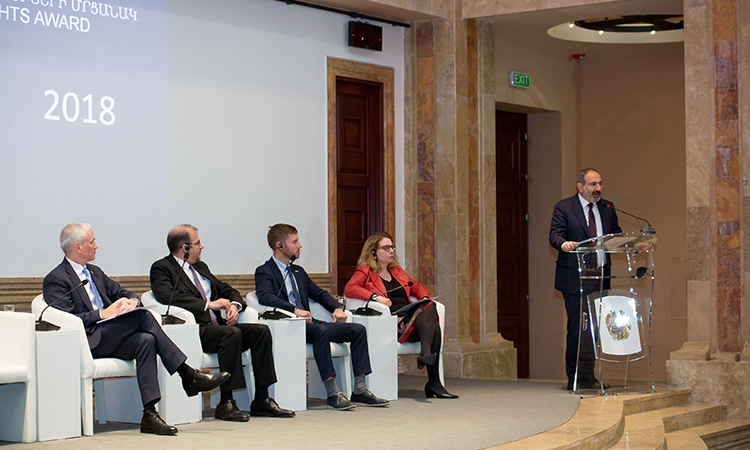 Yerevan, Armenia – The U.S. Embassy, the Delegation of the European Union to Armenia, the United Nations, the Embassy of the United Kingdom of Great Britain and Northern Ireland, the Council of Europe in Armenia, and the Embassy of Sweden honored individuals working to promote human rights, freedom of expression, diversity, democracy, transparency, legal reform and equal rights in Armenia at the Universal Rights Awards Ceremony today.  At the same event, the Embassy of the Republic of France and the Embassy of the Federal Republic of Germany bestowed their annual Franco-German Award for Equal Opportunities on an Armenian NGO.  Armenian Prime Minister Nikol Pashinyan attended the ceremony as the guest of honor.

“In 2018, the democratic world applauded peaceful political change that has taken place in Armenia. Underpinned by the fundamental values of freedom, equality and respect for the human rights, we trust, this course is irreversible. The EU is ready to continue and enhance its support to Armenia on this important path towards a modern, open and resilient society,” noted H. E. Piotr A. Świtalski, Ambassador and the Head of the European Union Delegation to Armenia.

“The time and place for human rights is always, everywhere, and last year we witnessed a remarkable, collective stand for greater rights and freedoms in Armenia that resonated across the world, with women and young people at the core. We must ensure this momentum does not falter, but rather spreads to all in Armenia, as  the protection of human rights is not only matter of humanity and universal values, but also key to achieving peace, stability and sustainable development in which everyone has a role to play,” mentioned Shombi Sharp, UN Resident Coordinator in Armenia.

U.S. Embassy Chargé d’Affaires Rafik Mansour said, “Our honorees fight for social justice for all – those in the majority and in the minority.  This is so important because diversity and inclusion – in government, in business, in education – benefits everyone…The U.S. Embassy will continue working with our partners to promote the universal truth that all people deserve justice, are worthy of education and employment, and are created equal.”

UK Ambassador Judith Farnworth said: “Today is about celebrating achievements in human rights promotion in Armenia. This year the panel was almost spoilt for choice when picking the winners – there are so many people who have stood up for  human rights, fundamental freedoms and democratic values in Armenia over the last remarkable year. I salute you all.”

“There is one thing that is common among all humans and that is that they are different. These differences could be physical, intellectual, emotional, sexual, you name it. And our differences are what make us unique, what actually define us as individuals”, stated the Head of the Council of Europe Office in Yerevan, Ms Natalia Voutova.

“In 2018 Armenia sent a powerful message to civil society groups and activists across the globe. You showed to people who struggle to stand up for what they believe in that their hard work can one day result in real political change,” stressed Charge d’ Affaires of the Embassy of Sweden, Martin Fredriksson.

Jonathan Lacôte, Ambassador of France said: “I’m happy that “Armenian Camp” is the awardee of Franco-German Prize for Equal Chances because of their valuable contribution in promotion of equal and full realization of the rights and fundamental freedoms of disabled persons in Armenia.”

Matthias Kiesler, Ambassador of Germany noted: “I am happy to announce that we have selected “Armenian Camp Non-Governmental Organization” to be the winner of  the Franco-German Prize in 2018. The “Armenian Camp NGO” has been actively supporting the rehabilitation and training of people with disabilities for the past 15 years. The heads of the NGO, Ms. Varduhi Aramyan and Mr. Samvel Rostomyan, succeed that people with disabilities can practice sports like skiing or mountain-trekking and by this can enjoy the same sport activities as people without disabilities. Practicing the same sports as people without disabilities is very important for the self-esteem of the disabled.