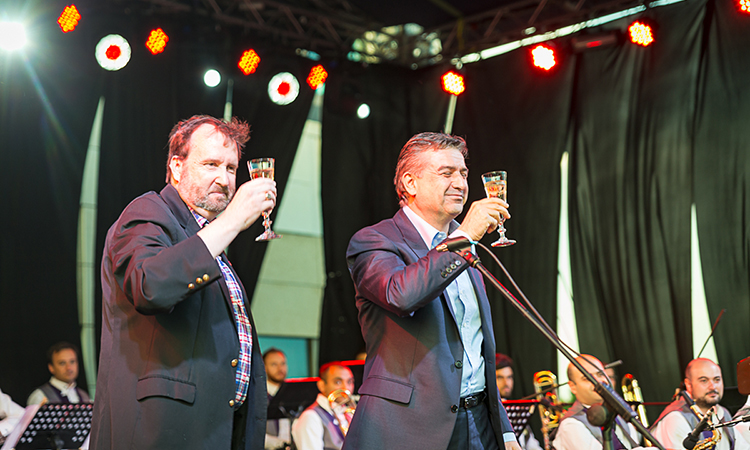 Yerevan, Armenia – On June 30, the U.S. Embassy celebrated the 241th anniversary of the independence of the United States at the U.S. Embassy in Yerevan with a summer evening of jazz, food, and fireworks.  During the event, U.S. Ambassador to Armenia Richard Mills, Jr. and guest of honor Armenian Prime Minister Karen Karapetyan praised the close partnership between Armenia and the United States.

In his remarks, Ambassador Mills noted that this year the Embassy was celebrating two anniversaries: the 241st anniversary of American independence and the 25th anniversary of diplomatic relations between Armenia and the United States. “As I reflect on the privilege and great prize of independence, my thoughts turn not just to the United States, but also to Armenia, which has accomplished so much since gaining independence in 1991,” said Ambassador Mills. “And while I can only imagine, via historical records, what it must have been like when our founding fathers declared American independence, I had the unforgettable honor of experiencing first-hand the birth and first steps of the independent Republic of Armenia.” Ambassador Mills shared anecdotes with guests about his time 25 years ago as the first Armenian Desk officer at the U.S. State Department, in charge of relations with the newly independent state, and reflected on the enduring partnership and sincere friendship between our two countries. “Together we have forged strong diplomatic, development, military, commercial, and people-to-people ties over the past 25 years. Those ties form the bedrock of our relationship as we look to further deepen our partnership in the years to come.”

The Armenian State Jazz Band performed American and Armenian pieces during the party, accompanied by the American jazz vocalist Michael Mayo. Over the next two weeks, the Armenian State Jazz Band will perform in Yerevan, Gyumri, Vanadzor, Ijevan, Meghri, Kapan, Goris, and Sisian as part of our “America on the Road” tour, the centerpiece of our year-long celebration of 25 years of diplomatic relations between the Republic of Armenia and the United States. In addition to a cultural program of jazz concerts and master classes, American film screenings, and book readings, all open to the public, we will also visit people, sites, and communities that have partnered with USAID, Peace Corps, and the Embassy over the last 25 years, celebrating the achievements and the very real difference they made in the lives of countless Armenians in support of our shared goal of a prosperous and democratic Armenia.