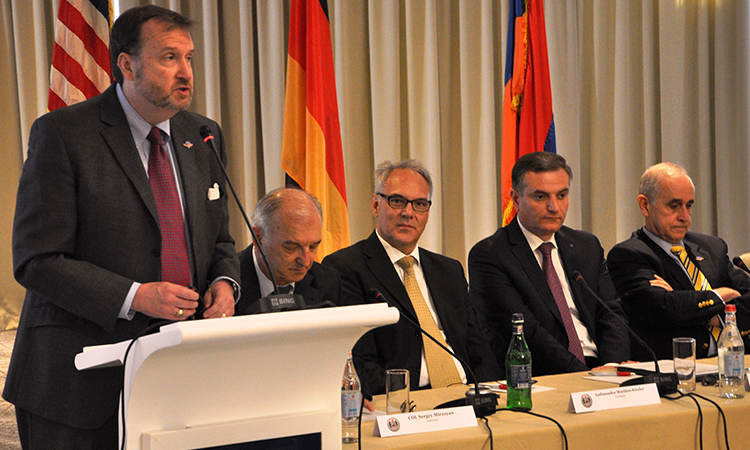 On Friday, leaders from Armenia’s military, ministries, institutions and agencies joined all alumni of the George C. Marshall Center’s Center for Security Studies for a conference focused on exploring Armenia’s security challenges.

“Armenian participation throughout the years in various Marshall Center programs has had an impact not only in how Armenian leaders and decision-makers approach security issues in the Caucasus region, but also for how Armenia engages on wider, Euro-Atlantic issues and security,” said U.S. Ambassador to Armenia Richard Mills, Jr., who opened the conference. “as graduates of the Marshall Center, this prestigious group of Alumni has forged strong partnerships and lasting friendships throughout the years, and they returned home to Armenia with new ideas to put to work in Armenia. They have also collectively contributed to a better and more robust understanding in Washington and many European capitals of the unique security and defense challenges facing Armenia and the Caucasus region.”

Following a keynote address by retired Lieutenant General Keith Dayton, the director of the George C. Marshall European Center for Security Studies, the group of alumni participated in two panel discussions. The first, focused on Armenia’s defense and foreign policy approach, featured discussions on Armenia’s relationship with NATO and the CSTO as well as with its neighbors. The second panel, focused on the unique security challenges in the south Caucasus Region, included a discussion on corruption as a national security challenge and the global threat of radicalization and terrorism.

“Thank you for the valuable contributions that each and every one of you make to Armenian-American partnership,” Ambassador Mills told participants. “The United States has proudly stood alongside Armenia as a friend and partner since the early days of your independence 25 years ago, and we look forward to deepening the friendship between our two nations for many years to come.”