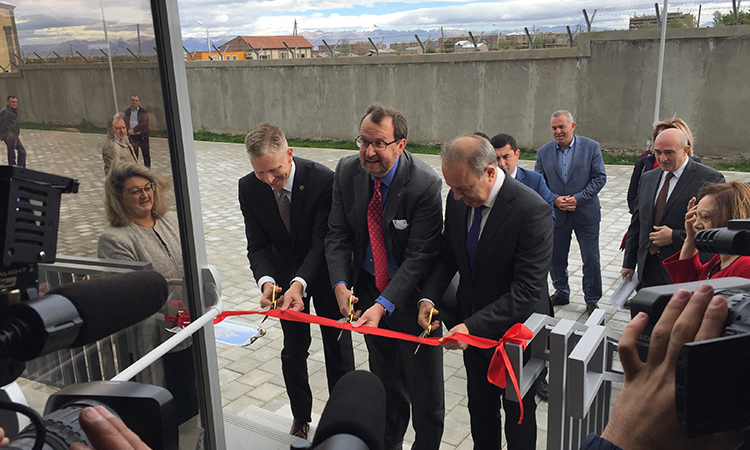 Residents in Martuni, Kapan, and Vanadzor are safer today thanks to the construction of laboratories designed to track, monitor, and fight infections.  The labs — constructed by the U.S. Embassy in Yerevan, provided with new technology, and updated to meet modern seismic safety standards – are part of the Ministry of Health’s National Center for Disease Control and Prevention.

On October 16, 2017, U.S. Ambassador to Armenia Richard Mills, Jr., joined Minister of Health Levon Altunyan to open the Ministry’s Gegharkunik Marz Laboratory in Martuni.  The Gegharkunik facility – one of three laboratories built this year by the U.S. Defense Threat Reduction Agency (DTRA) – is a sustainable facility that increases Armenia’s ability to ensure biosafety and biosecurity, protecting people and animals from disease.

“This new facility will allow Armenian scientists to do their job safely and effectively — to respond to any potential infectious disease outbreaks that could threaten Armenia’s citizens, its livestock, its economic livelihood, or national security,” Ambassador Mills said at the opening ceremony.

Along with the facility in Martuni, work was recently completed on two other new regional Ministry of Health laboratories, one in Kapan and another in Vanadzor.  They will both open later this week in ceremonies attended by high-level visitors from Washington, DC.

These modern facilities are seismic resistant, often replacing dilapidated Soviet-era facilities that had little modern seismic protection.  The program also included purchasing state-of-the-art equipment for the Ministry staff to use in identifying, testing, and treating diseases.  The U.S. government invested $9 million to construct, equip, and train laboratory staff from the Ministries of Health, Agriculture, and Emergency Situations to ensure the new labs meet international guidelines for biosafety.

The recently opened laboratories are part of the National Center of Disease Control and Prevention’s regional network.  Having a modern network throughout Armenia allows officials to effectively monitor the spread of disease and supports earlier detection and quicker responses to outbreaks.

The completion of these laboratories represents an important milestone for the cooperation between DTRA and the Ministry of Health.  With support from DTRA, Armenia is emerging as a regional leader in biosafety, biosecurity, and research.  The completion of this project highlights DTRA’s continued investment in Armenia’s public health sector.

“The ongoing cooperation between the United States and Armenia to improve Armenia’s biosafety capabilities are another example of our two nations cooperating toward achieving better health outcomes,” Ambassador Mills said.  “In the 21st century, with increased travel and globalization, a biosecurity lapse in one country can become an immediate threat to the health and economy of others.  So the need for continued collaboration, teamwork, and international cooperation in this arena is critical.”