Home Home | News & Events | The most effective firefighter in the U.S. SmokeyBear will visit Armenia 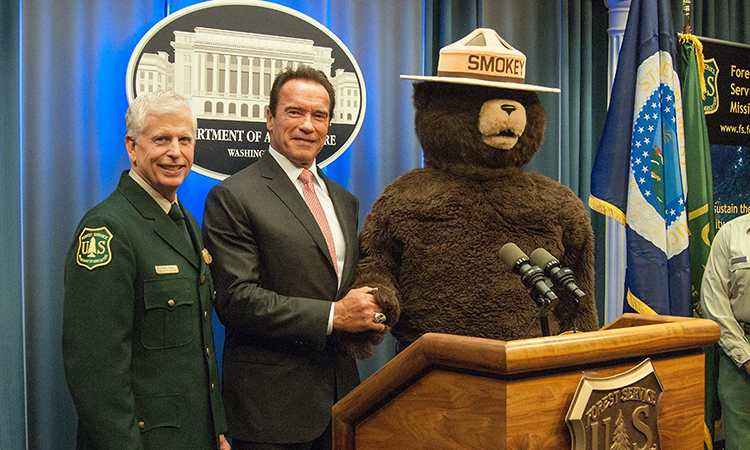 The most effective firefighter in the U.S. SmokeyBear will visit Armenia

YEREVAN, ARMENIA – Smokey Bear, the face of the longest-running public service announcement campaign in United States history, travels to Armenia next week as part of his first-ever trip abroad, continuing his legacy of bringing awareness to unwanted, human-caused fires.  The Smokey Bear wildfire prevention campaign has had a dramatic impact in the United States since its introduction in 1944.  Smokey Bear’s iconic image—dressed in a ranger’s hat, belted blue jeans, and carrying a shovel—and his one clear message, “Only You Can Prevent Wildfires,” have stood the test of time for over seven decades.

Throughout his illustrious career, Smokey Bear has appeared with thousands and thousands of children, leaving them with a powerful understanding of what they can do to prevent wildfires.  He has met with presidents and movie stars, including John F. Kennedy and Arnold Schwarzenegger, to amplify his message.  Thanks to Smokey Bear, several generations of Americans know that the vast majority of destructive wildfires are started by careless behavior like not properly putting out a campfire or adults tossing cigarettes out of a car window.  Smokey Bear’s famous catchphrase is recognized by 96 percent of U.S. adults. 75 percent of young adult outdoor recreationists who are familiar with Smokey Bear see him as a role model for children.

During his time in Armenia, Smokey Bear, U.S. Ambassador Lynne Tracy, and representatives of the U.S. Forest Service will meet with children and government officials and travel to notable forested areas in and around Yerevan to share with the public their lessons on how they can show their love for the outdoors and protect Armenia’s forests and wildlife.  See if you can spot Smokey Bear around town and join him in celebrating his 75th birthday!

The U.S. Forest Service is the agency responsible for overseeing the use of Smokey Bear in cooperation with the National Association of State Foresters and the Ad Council.  The Forest Service manages 193 million acres of national forests and grasslands for the American public. Its mission is to sustain the health, diversity, and productivity of the nation’s forests and grasslands to meet the needs of present and future generations.