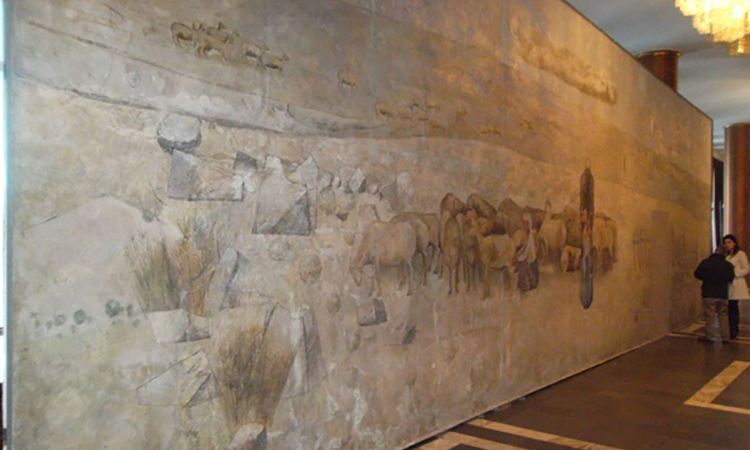 With the funding, the mural was removed from an abandoned factory building in Gyumri, repaired and conserved, and installed safely in the city’s Achemyan State Drama Theater where it is once again accessible to the public on the second floor.

“For the past several years the mural we are here to celebrate was hidden away in an abandoned factory. It was crumbling into dust,” Ambassador Mills said during the unveiling ceremony. “But thanks to the U.S. State Department’s Ambassadors’ Fund for Cultural Preservation it now has new life.  Now the eyes of the next generation of artists, community leaders, and innovators will see Hakobyan’s work, perhaps here of his story, and find in it inspiration to create future works of art that capture the spirit of Armenia.”

The mural was created by Hakob Hakobyan (1923-2013), an Armenian artist whose works are considered national treasures. His murals are included on the official list of historical and cultural treasures of Shirak province.

“The restorer’s work is a labor of love, of respect for artists and their works.  And their passion and dedication is clearly on display today,” Ambassador Mills said.

This is not the first time the U.S. Ambassadors’ Fund for Cultural Preservation has worked on rescuing a mural in Gyumri.  Last year, another project preserved Rafayel Atoyan’s “On the Way to the Watermill” mural, moving it from an abandoned factory to Gyumri’s newly-renovated Youth Palace.

The AFCP has been providing support for Armenian cultural sites since 2005, funding projects such as preserving the archeological finds at Areni cave, protecting the Dashtadem Fortress, mapping and cataloging items found at the Noratus medieval cemetery and its collection of khachkars, preservation of a medieval masonry bridge in the Garni Gorge, and documentation of traditional Armenian music and dance.  Earlier this fall, the AFCP awarded a $450,000 grant to preserve and restore the historic St. Hovhannes Church in  Meghri.

“Culture, art, traditions – these help celebrate the uniqueness of Armenia.  This love of culture is shared by Americans.  And by preserving these Armenian treasures, we not only help bring our two people together, but save a unique treasure for generations to come,” Ambassador Mills said.