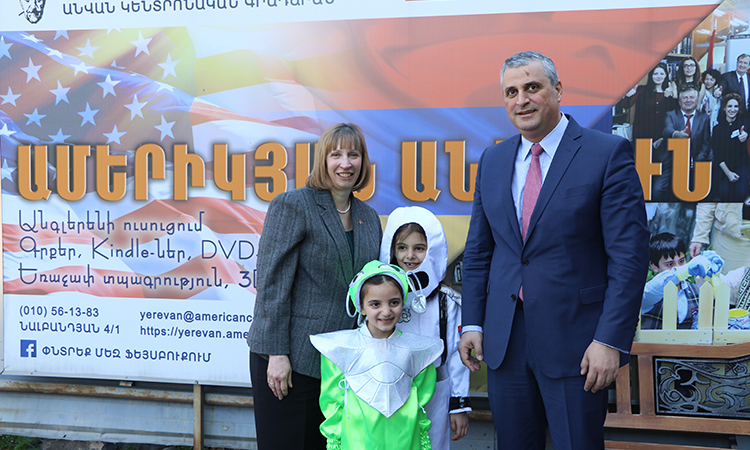 U.S. Ambassador to Armenia Lynne M. Tracy and Deputy Foreign Minister Grigor Hovhannisyan participated in the reading marathon alongside other U.S. diplomats, members of parliament, municipal officials, academics, literary figures, librarians and patrons.  Participants read portions of the book aloud, each reader taking turns reading for five minutes in English or Armenian.  The entire event was broadcast online on the U.S. Embassy’s YouTube channel.  The reading marathon highlights the value the United States and Armenia both place on reading and literacy.

“The Martian Chronicles” is a science fiction book that chronicles the colonization of Mars, as humans flee a troubled and eventually atomically devastated Earth.  The story follows the conflict between indigenous Martians and the colonists.  Written by Ray Bradbury, the work originated in short story form in the late 1940s and was published as a complete book in 1950.  It was translated into Armenian by Zaven Boyajyan in 2015.

Established more than 60 years ago to encourage reading at all ages, National Library Week is celebrated in the United States April 7-13 and in Armenia April 16-23.

As participants read the novel in the Yerevan American Corner, the other four American Corners in Armenia – Kapan, Charentsavan, Vanadzor, and Gyumri – as well as regional libraries across Armenia – connected via videoconference and offered a range of activities throughout the day for patrons.  The Embassy is donating copies of “The Martian Chronicles” to participating libraries in honor of their participation in this event.

The American Corners in Armenia celebrate literature and the English language throughout the year. In 2018, the Corners welcomed more than 77,000 visitors, and patrons checked out 36,300 English-language books and 5,408 DVDs.  They participated in 1,750 programs, including free English-language lessons, computer programming courses, business startup workshops, and 3D printing clubs.  On Monday, the U.S. Embassy and the Yerevan American Corner opened “TechnoLab,” a new technology hub, where visitors can learn about robotics, coding, and more.  Access to all of our Corners is free.  For more on the American Corners in Armenia, check out their website: https://www.americancorners.am/.