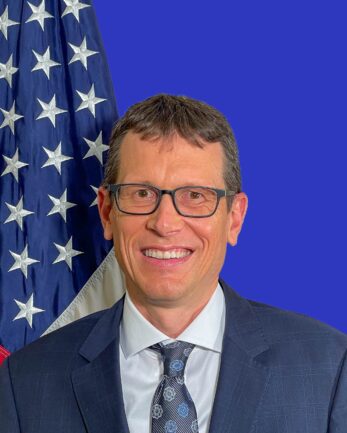 Chip Laitinen, a career member of the U.S. Foreign Service, is Deputy Chief of Mission at the Embassy of the United States of America in Yerevan, Armenia. Prior to this, he served as the Counselor for Economic Affairs at the U.S. Embassy in Athens, Greece.  Previously Mr. Laitinen headed up embassy economic teams in Islamabad, Pakistan and Kyiv, Ukraine. He also served as an Economist in the Office of Development Finance at the U.S. Department of State in Washington, and has worked at U.S. missions in Tashkent, Uzbekistan, Bratislava, Slovakia, Ottawa, Canada and Dhaka, Bangladesh.  Prior to joining the Foreign Service, he worked as an economic consultant in Washington, DC and served as a Peace Corps Volunteer in Ghana.

Mr. Laitinen holds a Masters’ degree in International Relations from the Fletcher School of Law and Diplomacy and a Bachelors’ degree in Mathematics from Denison University.  He is married to Valeria Laitinen; they have two children.