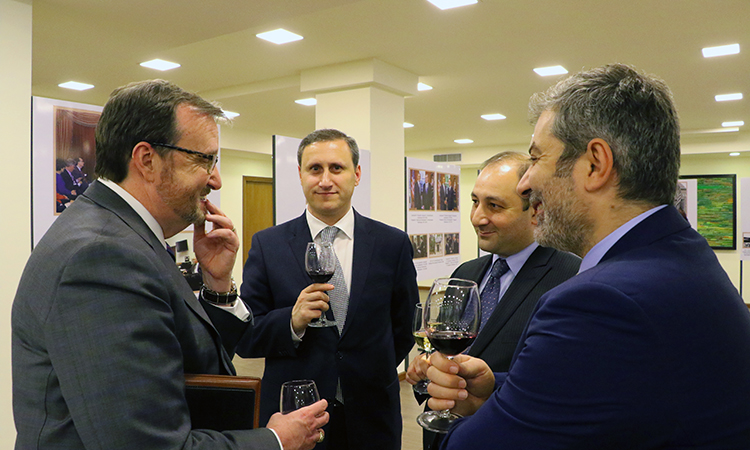 My staff and I are honored to join you today to commemorate the 25th anniversary of U.S.-Armenian diplomatic relations with this beautiful photo exhibit, curated from photos from the archives of the MFA and the U.S. Embassy. I think the images displayed in this exhibit powerfully illustrate just how strong, deep, and multi-faceted our bilateral relationship is. I would like to express my sincere gratitude to Minister Nalbandian and the staff of the Ministry of Foreign Affairs for hosting this special event.

The United States has been a steadfast friend throughout the Republic of Armenia’s 25-year history. We were the first country to open an embassy in Yerevan – on February 3, 1992, in the Hrazdan Hotel – and we established Peace Corps Armenia and USAID Armenia later that same year. Together we have forged strong diplomatic, development, military, commercial, and people-to-people ties over the past 25 years – ties that now form the bedrock of our strong friendship as we look to deepen our relationship in the years to come.

Armenia is a vastly different place from what it was 25 years ago, when I had the honor of serving as the first desk officer at the State Department for the newly independent Republic of Armenia. I recall vividly some of the key moments from that period, which I witnessed first-hand as I played my small role at the birth of our formal diplomatic relationship. I remember drafting the official memo for then Secretary of State Baker in which he officially approved U.S. recognition of the soon-to-be-independent Republic of Armenia; I remember the first visit of the Armenian President to Washington—and I recall sitting on the floor of the State Department lobby—holding our newly purchased Armenian flag up to the light to make sure the flag’s colors really were red, blue and orange, not red, blue and yello! I remember meeting for the first time with a group of active, committed diasporans who had the brave idea of, maybe, establishing an American University in Armenia, as well as the first time I met the leaders of the Armenian Assembly of America who wanted to help the U.S. Embassy find space for an Embassy building in Yerevan.  It was a difficult, challenging time for Armenia in that period, but also a time of great expectation, focus and hope.  I was privileged to be a part of it. And Armenians everywhere can be proud of how far Armenia has developed and prospered. As I look around the room, I see other friends and partners who have made important contributions to U.S.-Armenian friendship, many of whom were also there 25, 20 years ago at the birth of our relationship.  I see Armenian government and U.S. Embassy staff, the people responsible for the day-to-day stewardship of our relationship. Others with us today – prominent diasporans, and representatives from the Church, academia, business, the cultural sphere, media, and civil society – have been instrumental in enriching our ties. As a result of the collective efforts of many in this room, a generation of Armenian and American citizens view each other as partners and friends.

One of our main pillars of partnership has been our USAID mission. Since 1992, USAID Armenia has provided 1.1 billion dollars to improve the lives of the Armenian people. While USAID originally focused on humanitarian assistance in the wake of the Spitak earthquake and difficult living conditions exacerbated by the Nagorno-Karabakh War, USAID shifted to long-term development goals as Armenian capacity increased.  USAID programs have made a real difference in many sectors; one of the most important of these has been the IT field.

Its current activities include projects in water resource management, rural development and agribusiness, tourism and civil aviation, anti-corruption, civil society and the media, and energy security.

On the economic front, we are transitioning from aid to trade due to the impressive development of the Armenian economy and its business environment.  U.S. investors are increasingly exploring business opportunities in Armenia, and over the last two years alone, we have helped bring over 500 million dollars in direct U.S. investment into Armenia’s energy and mining sectors. We are looking forward to expanding U.S. investment in Armenia’s renewable energy, IT, and tourism sectors as well.

Our bilateral security partnership is also a source of great pride.  The U.S. and Armenian militaries collaborate in many areas, including defense reform and battlefield medical training, and Armenia has received 48 million dollars for non-lethal equipment, such as medical field hospital systems, tactical radios, and body armor. In addition, the U.S. government has provided more than seven million dollars for an International Military Education and Training program that has graduated 210 Armenian students from U.S. military courses, and the U.S. military has invested more than four million dollars in 22 humanitarian assistance projects that have renovated schools, hospitals, orphanages, and fire stations.

And as I often repeat: Armenia deserves enormous credit for becoming an exporter of security, and the U.S. applauds Armenia’s impressive contributions to international peacekeeping operations.

Lastly, let me talk about three of the people-to-people initiatives that reinforce the ties between our two nations: the Peace Corps, our American Corners, and our array of U.S. government exchange programs. The Peace Corps, active in Armenia since 1992, welcomed the 25th group of volunteers just last week. In this group we welcomed our 1000th volunteer – quite a milestone. Peace Corps Volunteers serve in cities, towns and villages throughout Armenia, forging relationships with their host families and communities that last a lifetime. Another important people-to-people program is our five American Corners – in Yerevan, Gyumri, Kapan, Vanadzor, and Charentsavan. Every year, more and more Armenians come to our Corners, which in 2016 welcomed more than 72,000 Armenians for English classes, technology training, conversation and movie clubs, and other programs.  And of course, we cannot talk about partnerships without mentioning our educational and professional exchange programs, such as Fulbright, IVLP and FLEX. Many of you here know these programs well, as I’m sure there are many alumni here.

These exchanges provide opportunities for Armenian government officials, professors, researchers, business professionals, and students to enrich their knowledge, forge connections with the American people, and learn about U.S. culture and society. Today, nearly 4,000 alumni of our exchange programs are making significant contributions to Armenia.

I could go on. These examples barely scratch the surface of the cooperation between our two countries.  But I hope I have managed to give you a flavor of the depth and diversity of the U.S.-Armenia relationship.

Before closing, I would like to also recognize the role and influence of the Armenian-American diaspora. Organizations such as AGBU, COAF, the Impact Hub, the Hovnanian Foundation, and the Cafesjian Center for the Arts – to name just a few – have had a positive impact on rural development, job creation, education, and cultural preservation in Armenia, and have been an invaluable and enduring component of the partnership between our two countries.

As we honor our 25 years of diplomatic relations and friendship with this photo exhibit, and with other commemorative events we have planned throughout the year, let us both celebrate what we have achieved, and look to our shared future.

As our 25th anniversary motto reads, “Together in Partnership – 25 Years and Beyond.”