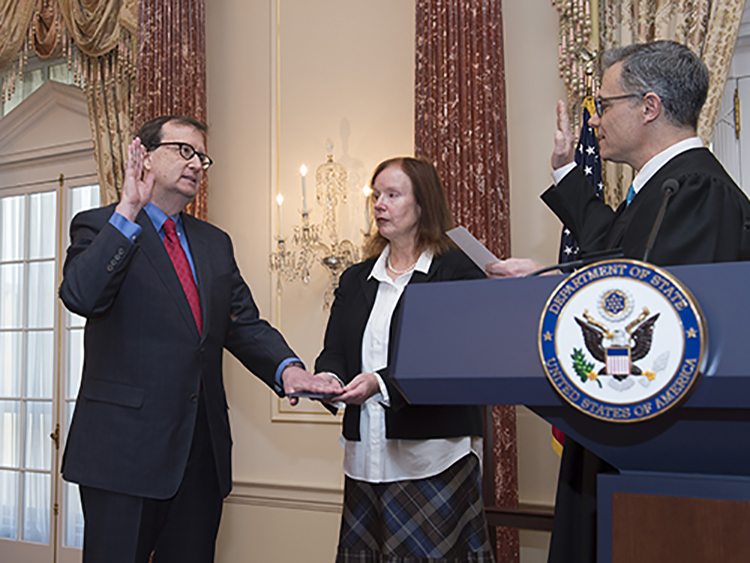 Thank you, Eric for your generous remarks. I am so pleased, as the new U.S. Ambassador to Armenia, to be working with you again as a member of the outstanding team that Assistant Secretary Nuland leads in the Bureau of Europe and Eurasian Affairs.

And my heartfelt thanks to Judge Berg for travelling to Washington today, with Anita, to deliver the oath of office.   Throughout our friendship I have been continually inspired by Terry and Anita’s dedication to public service and to improving their community in Detroit.  That is why it is so meaningful for me to have you both here today.

Members of the Armenian-American community;

And my State Department and U.S. Government Colleagues

I am deeply grateful for the trust and confidence the President and Secretary Kerry have shown in me by giving me this opportunity to lead the outstanding team at U.S. Embassy Yerevan.   I am fortunate to be able to build on the impressive achievements of my predecessor as Ambassador to Armenia, John Heffern, as I take up this responsibility.

The goal of our Armenian policy is straightforward:  a free and prosperous Armenia, at peace with its neighbors.   To achieve that goal, my priorities will be to assist the Armenian Government and people in strengthening Armenia’s democracy and rule of law; and liberalizing its economy and expanding its trade with a range of partners, including the United States.

But as I leave for Armenia, two other immediate issues are at the top of the Embassy’s agenda and my own. The first is regional peace. The sharp rise in violence and casualties along the Nagorno-Karabakh line of conflict over the past year is deeply troubling and it is in no nation’s interest. The United States appreciates Armenia’s commitment to resolving the Nagorno-Karabakh conflict peacefully. The United States is committed to helping the parties reach a peaceful, negotiated settlement through the Minsk Group process.  In Yerevan, I will make it a priority to coordinate with Ambassador James Warlick, the U.S. Co-Chair of the Minsk Group, on how the Embassy and I can assist his efforts to quell this troubling upsurge in violence and find a peaceful settlement.

The other issue of special importance as I begin my service in Yerevan is the commemoration this year of the centenary of one of the 20th century’s worst atrocities.   I want to emphasize to the Armenian community that I understand the special responsibility this anniversary places on Embassy Yerevan in the coming months.  So I want to speak my next words directly to the community in Armenian:

(Delivered in Armenian) This year, 1915, has great and special significance for the entire world.  The U.S. embassy in Yerevan will work to demonstrate that the United States and American people stand in solidarity with the Armenian people at this solemn time and will never, never forget this tragedy, in which more than a million Armenians were killed.

As the U.S. ambassador to Armenia, the wealth I seek to bring home is not material riches, but lessons.  The lessons our nation can learn from the Armenian people’s capacity for political and social renewal in the face of great tragedy, and from Armenia’s rich and welcoming culture, which took shape at the crossroads of Europe and Asia.  And I seek to bring home the benefits to America’s own national interest that will come from assisting the modern Armenian nation build a free, prosperous and secure future, on the basis of our shared democratic values.

But I know that, if I prove successful in bringing these riches back home, it is because I am, in the words of that inscription, a traveler who will indeed carry with him the wealth of the Indes – and that wealth is the support, the guidance, and the friendship of all of you here in this room today.

There are of course so many individuals I need and want to thank for seeing me to this moment, but like a good Oscar winner, I’m aware that the wind-up music could start at any minute.   So let me begin by saying to all the friends and family who have traveled to Washington today, how deeply touched I am that you are here to share this moment with Leigh and me.

Some of you have been friends since grade school, like Ken and Anne Miller here from Detroit, and others since college, like Brian Rink, who has flown from San Francisco.  I could not be where I am standing today without all of these friends’ tough-minded support, and their encouragement.

I’ve been inspired for forty years by my sister, Malise’s, fierce sense of right and wrong and her personal integrity.  And I’ve tried for forty years to model in my own life my brother Randy’s calm competence and good-humored ability to take life’s challenges in stride.  Thank you both for being here today.

I would not be standing here without the clear-headed advice and unconditional love of my parents.  They never questioned my decision to follow a career dedicated to promoting understanding overseas of the United States and its values. And this was even after paying for three years of law school.

Mom, Dad –so much of what I have achieved is thanks to you, all that I will achieve I dedicate to you.

Now, I must address an elephant in the room.  I know many of you, especially my State Department colleagues, are thinking quietly to yourselves, “Who would have guessed, Rick Mills named an ambassador?  The smart money was on Leigh.”  And of course it was – heck, I even thought my retirement plan would be – “Leigh serves as a Chief of Mission and I retire.”

But Leigh had the good sense to know that the best time to leave a party is when you are having a good time.   And so she chose such a moment to end her diplomatic career a few years back and pursue new paths.  So, I too know that I stand where she might have stood had she wanted to.  Most importantly, I know, as do many in this room, I could not be standing here if Leigh had not been at my side for the last 25 years.

But of the riches that this traveler takes with him on this journey across the ocean perhaps the most valuable are the skills, the leadership lessons, and the confidence I have gained from working with my fellow members of the State Department and other U.S. Government agencies during my career.   I have served with, and learned from, many of our Government’s best and most dedicated civil servants, foreign service officers, military officers, and locally-engaged staff at Embassies around the world.

It took a village to get me prepared for my new role in Yerevan.  I have the deepest admiration for Jason Peterson, the desk officer for Armenia, and to whom I owe deep thanks.  I owe that same gratitude to all my colleagues in the Office of Caucasus Affairs who have been so genuinely helpful and patient over these past several months.   I owe a special debt of gratitude to Kim Magee and Michelle Sanchez, for overseeing the hard work needed to plan this event.

Finally, my gratitude to my patient Armenian language teacher these past several months, Karina Sapondjian.  I’ve never had a better language instructor!

Let me close by thanking the President again for this opportunity to strengthen U.S. relations with Armenia and to assist the people of that historic nation in ensuring the secure, peaceful, and prosperous future they deserve.