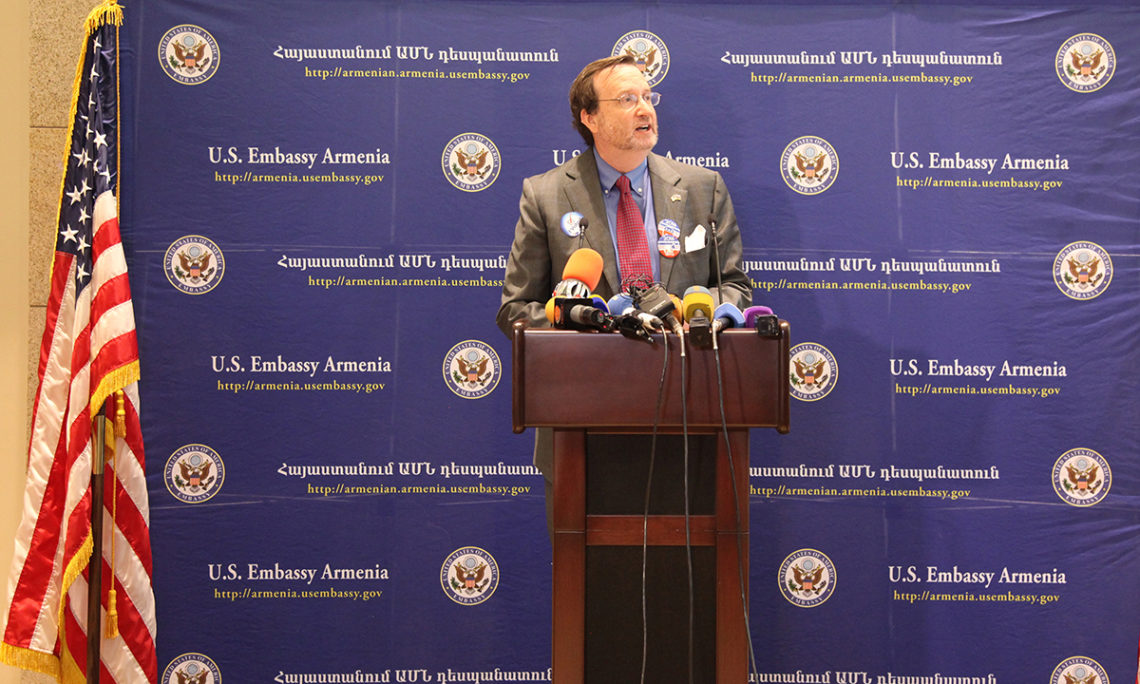 On the morning of November 9, a diverse group of government officials, politicians, civil society representatives, students, educators, and members of the press joined U.S. Ambassador to Armenia Richard Mills, Jr. for an Election Watch Party at the U.S. Embassy.  As the results of the U.S. presidential and congressional elections were broadcast live from the United States, both American staff and our Armenian guests experienced the excitement of the democratic process in action as polls closed and votes were tabulated across the U.S.

More than 800 invited guests had the opportunity to interact with American diplomats and discuss the elections as real-time results were reported by various U.S. TV channels.  In addition to the live coverage, the Embassy provided a range of informational materials about the U.S. elections and the U.S democratic process, many of which are available in English and Armenian at the U.S. Embassy website at (https://armenia.usembassy.gov/).

In his remarks to the assembled audience, Ambassador Richard M. Mills, Jr. emphasized that “today is a special day, one that comes along every four years, when the United States reaffirms and celebrates its democratic tradition, 240 years strong, of calling upon the people to elect their next president. As passionate and intense as this year’s election campaign has been, Americans know that as a result of yesterday’s vote, executive power will be transferred peacefully on January 20, 2017 in accordance with the U.S. Constitution and rule of law.  As Secretary Kerry said just last week, ‘we’re now engaged in the 58th free and open presidential selection process for the 58th consecutive time.  Compared to a lot of places in the world, that’s pretty amazing’.”

President Obama, who is nearing the end of his second and last term, will step down when his successor is inaugurated on Friday, January 20, 2017. Ambassador Mills reaffirmed to the gathered Armenian guests that the excellent partnership between the U.S. and Armenia, which are celebrating their 25th anniversary of diplomatic relations this year, will stay strong regardless of who is elected the next president of the United States.

“The U.S. remains committed to our shared goal of an independent and prosperous Armenia at peace with its neighbors, and regardless of who the next president is, the U.S. government and the U.S. Embassy will remain steadfast partners and friends to Armenia, as we work together to ensure the democratic and prosperous future that the Armenian people deserve.