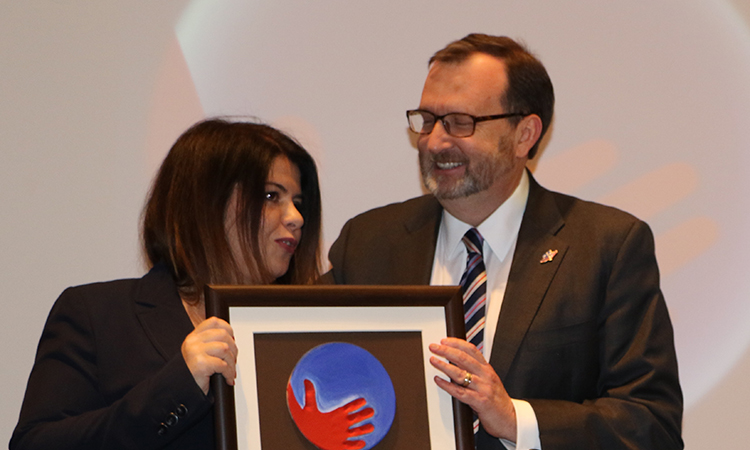 Yerevan, Armenia – The U.S. Embassy, the Embassy of the Federal Republic of Germany, the Delegation of the European Union to Armenia, the Embassy of the United Kingdom of Great Britain and Northern Ireland, the Embassy of the Republic of France, the United Nations, and the Council of Europe honoured individuals working to promote human rights, freedom of expression, diversity, religious acceptance, democracy, transparency, legal reform and equal rights in Armenia at the Universal Rights Awards Ceremony today. Since 2012, the Universal Rights Awards Ceremony was the first initiative of the international community to highlight contributions of Armenia’s civil and political rights activists, government officials, media and civil society representatives to the promotion of human rights. Armenian officials, foreign diplomats, civil society and press representatives attended the event.

The United Nations Resident Coordinator, Mr Bradley Busetto presented the “Woman of Courage” award. “In times of crisis and armed conflict human rights are infringed upon the most and only a few have the courage to come up-front and support others while their own lives are endangered.  Ms. Ani Balkhian, was among the few to step-up for life-saving mission supporting people to flee the conflict zone during Syria crisis. Ms. Balkhian was courageous enough to continue her vital mission being already in Armenia by speaking-out and supporting the settlement of displaced Syrian families. It is my honour to present the “Woman of Courage” Award to Ms. Balkhian in recognition of her endurance in pursuing her humanitarian efforts, for her outstanding level of engagement in life-saving and refugee protection mission, and for her lasting courageous advocacy for integration of Syrian families,” said Mr Busetto.

H.E. Piotr A. Świtalski, Ambassador and the Head of the European Union Delegation to Armenia awarded the Union of Informed Citizens NGO and its Programme Director Daniel Ioannisyan with the “Promoting Justice and Transparency” award. “The European Union commends the Union of Informed Citizens and Daniel Ioannisyan in recognition of their efforts to promote democratic and transparent electoral process in the Republic of Armenia,” said Ambassador Świtalski.

The Head of the Council of Europe Office in Yerevan, Ms Natalia Voutova handed over the “Government Reformer” award. “Mr Vigen Kocharyan has contributed to the implementation of legal reforms in the Republic of Armenia. His efforts to promote all aspects of fundamental rights in Armenia as well as his support to the dialogue between the Government and the civil society organisations cannot go unnoticed. Such an award forms the highest level of recognition and is a showcase of success stories realized by a committed reformer such as Mr Kocharyan. Hence, on behalf of the Council of Europe, it is an honor and pleasure for me to hand over this prize to Mr Kocharyan,” said Ms Voutova.

H.E. Richard Mills, Jr., U.S. Ambassador to Armenia presented the “Media Excellence” award to MediaLab Newsroom Laboratory. “Today, more than ever, we must cherish freedom of expression, the foundation of any free and democratic society.  It is my great honor to present the Media Excellence Award to MediaLab Newsroom Laboratory for its consequential work shedding light and starting public discussions on some of the most controversial issues that Armenian society faces today.  Led by an exceptional reporter, Marianna Grigoryan, MediaLab has constantly found creative ways and shown ingenuity in starting tough conversations to create a more just, free and democratic Armenia.  They have often told and shown people what they do not want to hear, and I applaud their courage for doing so with grace, humor and great professionalism,” said Ambassador Mills.

The Deputy Head of Mission of the United Kingdom of Great Britain and Northern Ireland, Ms Alison Chick gave the “Freedom Defender” award. “Defending the right to freedom of religion or belief is important, not only because it is a principle worth defending for its own sake but because we believe that societies in which people are free to practice their faith or belief are more stable and prosperous. I am delighted to announce that the Freedom Defender award this year goes to Isabella Sargsyan in recognition of her tireless efforts to promote diversity, freedom of thought and religious acceptance,” said Ms Chick.

This year, the French and German Embassies in Armenia for the first time presented a joint “Franco-German Prize for Equal Chances.” This prize, part of a worldwide Franco-German initiative, is intended to honour an organisation or a person in Armenia that has excelled in the fight against discrimination. H.E. Jonathan Lacôte, Ambassador of France said: “I am proud that French and German Embassies got united to support the work of civil society towards a more inclusive society with equal chances for all”.  H.E. Matthias Kiesler, Ambassador of Germany said: “I am happy to announce that we have selected “Agate – Rights Defense Center for Women with Disabilities NGO” based in Gyumri for the first Franco-German Prize. It is very encouraging to see that, over the past 10 years, “Agate” has implemented more than 50 programmes. These activities had a positive impact on more than 1,000 people with disabilities and their family members.”