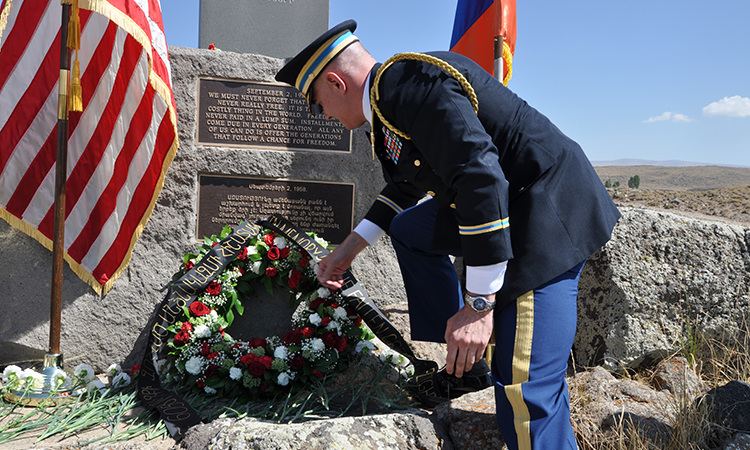 On September 2, U.S. Defense Attaché in Armenia Colonel Bruce A. Murphy and other Department of Defense members from the U.S. Embassy in Yerevan  joined residents of Sasnashen to mark the 59th anniversary of the crash of a U.S. Air Force C-130, which was shot down by Soviet fighter jets over Armenian soil.  The crash, which occurred in 1958, resulted in the death of all 17 U.S. Air Force service members on board.  The solemn anniversary event was held at the C-130 monument in Sasnashen, located on a rocky outcrop overlooking the plane crash site.

After Soviet fighter jets attacked the unarmed cargo aircraft which had inadvertently strayed off-course, the C-130 began to plummet to the ground with the right wing on fire and tail assembly separating from the aircraft.  According to local residents, the U.S. airmen maneuvered the aircraft to avoid the village and, through these skillful and selfless actions, prevented further unnecessary loss of life.  In recognition of their heroism, residents have commemorated the anniversary of the crash by laying flowers every year since Armenia’s independence.

Colonel Murphy noted that the ceremony was not only about remembering the lives lost that day, but also about the partnership between the United States and Armenia, as evidenced by Sasnashen residents taking it upon themselves to commemorate the anniversary each year and by building a beautiful monument inscribed with a quote from former U.S. President Ronald Reagan:  “We must never forget that freedom is never really free.  It is the most costly thing in the world.  Freedom is never paid in a lump sum.  Installments come due in every generation.  All any of us can do is offer the generations that follow a chance for freedom.”