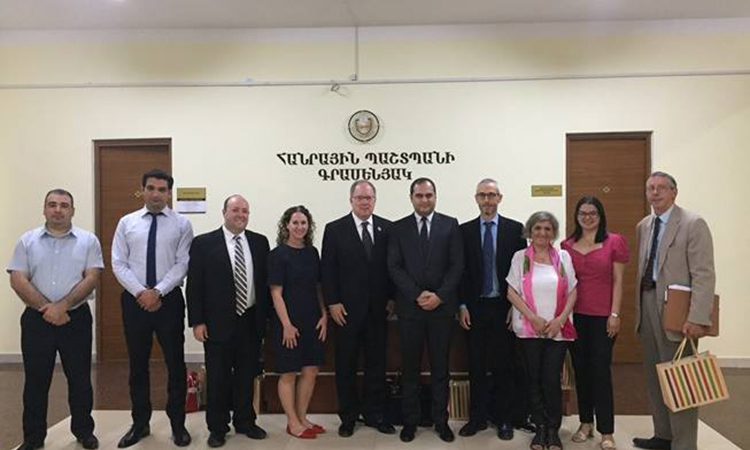 (Madison) The Wisconsin State Public Defender (SPD) is lending its expertise to strengthen the public defense system of the Republic of Armenia.  Funded by the U.S. Department of State’s Bureau of International Narcotics and Law Enforcement Affairs (INL), the SPD’s involvement continues the agency’s track record of assisting public defense programs operating in other jurisdictions and other countries.

An initial week-long visit in July allowed the SPD to learn first-hand about Armenia’s public defense system.  Longer follow-up visits later this year and in 2018 will include training and mentoring efforts to be determined by needs identified during the initial visit.

Wisconsin’s Public Defender Kelli Thompson, in support of Wisconsin’s efforts, stated, “We are honored to once again provide our expertise in order to assist other defense programs, this time in Armenia. When we work with programs in other jurisdictions and other countries, we appreciate the opportunity to share Wisconsin’s dedication to the rule of law and to a balanced and fair justice system.”

The initial week-long consultation visit was conducted by the SPD’s Deputy State Public Defender Mike Tobin, Training Director Gina Pruski, and Legislative Liaison Adam Plotkin.  Depending on the findings of the SPD’s three-person team, additional SPD staff may participate in the training and mentoring phases.

This initiative continues the SPD’s long history of helping public defense systems both nationally and internationally including Israel, Japan, Michigan, and New Orleans.  Learn more  here about how the U.S. State Department’s INL Bureau works to keep Americans safe by countering international crime and supporting the rule of law.