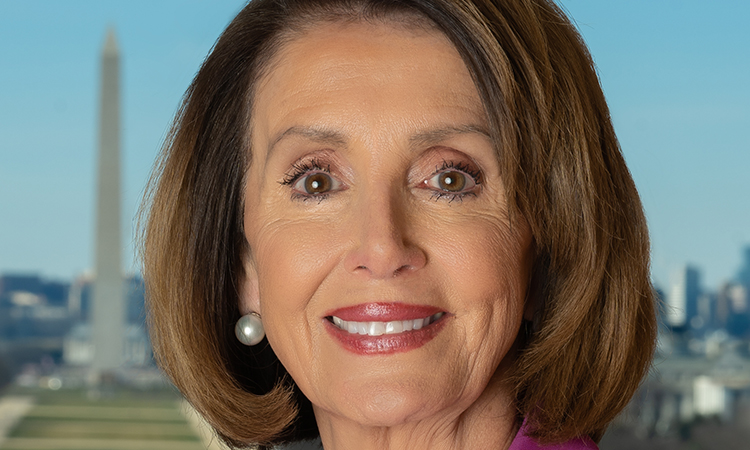 Speaker of the House of Representatives Nancy Pelosi

Yerevan, Armenia – Speaker Nancy Pelosi delivered an address at the Cafesjian Center for the Arts to reaffirm America’s strong support for the people of Armena and for their security and democracy.  Below are the Speaker’s remarks:

Thank you to the journalists, activists, civil society and political leaders who are here with taking – you all are taking Armenia to a peaceful, prosperous, democratic future.  I look forward to hearing from you.

It’s a great honor as Speaker of the House, the highest-ranking American official to visit Armenia, to be standing here before you between the flags of our two countries.  With great pride in front of our American flag and its great partnership with the Armenian flag.  It is interesting, also, to be standing in front of this great presentation.  I told Vahagn when we were coming in that I believe it is appropriate we are here at the Cafesjian Center for the Arts, we had this discussion – because as my colleagues will tell you, I always say: ‘The arts will bring us together.’  A time where we forget our differences, we share the glory of – history of our countries, if its within a country, the art, the artists and others, maybe even journalists at that time in that final painting there.  Here, winning the war against the Persians for the democratic and Christian country that Armenia has been.  And then going way back in history, I should have started over here to the start of the alphabet.

Again, a work of art, a facilitator of writing and the arts.  But when we enjoy the arts, as we have coming in here – not completely because we haven’t seen the whole museum, but it inspires you.  It makes you laugh, it makes you cry, and you forget your differences around the arts.  Thank you, Vahagn, for your hospitality here today.

It is a particular joy to be here as we are on the verge of Armenia Independence Day, September 21st.  You know that date better than any of us.  And on behalf of the United States Congress, I want you to accept our congratulations on this special day.  We say that with great pride because for us, it’s almost like a family visit.  So blessed are all of us in our districts by so many Armenian Americans.  They, with great pride, are patriotic Americans.  Very, very proud of their Armenian heritage.  And they make that very clear to us.

And we follow Armenian challenges through their eyes, and we are very proud to finally be able to pass the resolution observing the Armenian Genocide because we, at last, have a President who would sign it.  Joe Biden has been a friend of Armenia.  We are proud that he has signed it and was an inspiration for its passage, but also that he invited the Prime Minister of Armenia to the Democracy Summit, which was a very coveted invitation.  I want you to know that.

And so we’re here, committed, just to say America is committed to Armenia’s security, democracy and we stand with Armenia in a difficult time.  It is a difficult time in the world.  We are amidst a battle between democracy and autocracy.  Armenia is a place where we can see those contrasts come into play.  Again, we come at a time – we didn’t plan trip around what happened last week, the trip was planned before that.  But it so happens that we come in time, in person — strongly condemn Azerbaijan’s recent attacks on Armenia.  Make no mistake: this assault is unacceptable and threatening prospects for the much needed peace agreement – peace process to succeed.

America is an OSCE Minsk Group Co-Chair and friend of Armenia.  The United States is committed to supporting a negotiated, comprehensive and sustainable settlement, including especially those hostilities directed towards civilians.  As the U.S. government has long made clear there can be no military solution to the conflict.  A sustained renewal of hostilities would be disastrous with more loss of life, more destruction, more refugees and with enormous cost.  The United States continues to watch the situation closely.  This is a priority for President Biden and for the Congress, who have long been committed to stability, security and peace between Armenia and Azerbaijan.

Let me just say, in that regard, that Armenia’s at the center of this debate between democracy and autocracy with its proximity to Russia, but it’s also a part of our global discussion or contrast between the two.  So we find this to be a perfect time to be here as to what is going on in Ukraine, their fight for freedom, as we advocate a peaceful resolution of what is happening here.

As our delegation comes to Armenia to discuss matters of security, democracy and the economy, well-served by the presence, again, of three leaders in the Congress who have fought for issues relating to Armenia for their lifetimes in Congress and even before that.  For Anna Eshoo and Jackie Speier, it’s been since birth because they are Armenian Americans.  It’s in their DNA, but it’s also in their priorities in service to our country in the Congress.  And they have been an enormous intellectual resource to our colleagues on the subject, not only the genocide resolution but other issues that relate to Armenia, Nagorno-Karabakh and other conflicts here.  And of course, they’re all members of the Armenian Caucus.  Jackie and the Chairman Frank Pallone are Co-Chairs of the Caucus, and Frank has been blessed with a large Armenian population which has informed him from the start because I don’t remember a time – how long have you been in Congress?

Speaker Pelosi.  34.  So I’ve been there 35, so I’ve observed every year of his involvement.

Okay, and then we go on to actually what we saw today.  It was very emotional.  Especially – we came holding our heads up high, because we could come at a time when we had passed – and the President signed – the genocide – the Armenian Genocide resolution.  For a long time, we’ve been talking about it, advocating for it in our communities, in the Congress.  But now, it was done.

And to stand there before the flame, thinking a million and a half people and their families, some of them, the ancestors of so many Armenian Americans, too, that we keep hearing the story of that painful time.  We saw the memorial — it was very moving, what we saw at the museum was beautiful.  It was beautiful.

Well, we laid the wreath.  That was a cheerful occasion for all of us.  But then in the museum, we saw the names of communities that had been under assault.  We walked – we learned the horrific truth at the museum institute.  And then as we left, we walked, as we had done coming in, along the trees.  It was a source of honor to us, pride to us, that the first tree was an American tree.  I think it was the first.  The first American tree was planted by Senator Bob Dole.  We’re very proud of him, and of that, but many other trees by delegations since then.  And Frank has been – and Anna and Jackie – Congresspeople who have been here before have seen these trees grow quite rapidly.  That’s what they do.

To heal those still open wounds, the world must acknowledge the crime for which it was: genocide.  According to [the] 1948 UN Genocide Convention, genocide means ‘acts committed with the intent to destroy, in whole or in part, a national, ethnical, racial [or] religious group.’  We must work to ensure that the truth of the genocide is never covered up.  And we must work to ensure that such atrocities do not happen again.  We must not – never forget.

That is why in 2019 House Resolution 296 — authored by the Chair of our Intelligence Committee Adam Schiff and co-sponsored by all of this – Congress committed not only to commemorating the Armenian genocide through official recognition and remembrance, but also fighting efforts to erase the history, as we reject efforts to enlist, engage and otherwise associate the United States with the denial of the Armenian Genocide, or any other genocide.  That we encourage education and public understanding of the facts of the Armenian genocide, including the relevance of the Armenian Genocide to modern day crimes against humanity.  With this resolution and the U.S. government’s formal recognition of the genocide, we commit to affirming Armenia’s history, denouncing violence and bigotry and showing that such an atrocity, again, can never happen again.

Right now, we feel the urgency of our own moral obligation to never forget, as we witness horrors being perpetrated around the globe, including hate crimes against [the] Armenian community, even in America, genocide committed against Uyghurs and all the Russians’ barbarity against the brave people of Ukraine, and Azerbaijan’s use of force in Armenia, killing over 100 Armenians and displacing thousands.  Not to mention what they are doing in Nagorna-Karabakh to people and holy sites.

During this difficult time, my message is: we must have hope.  And we can find hope in the story of Armenia, which is one of resilience and strength.  And we find hope in the arts.  Here in this room, we gather before the history of Armenia mural – history of Armenia mural, which tells the story we see, the brave warriors, again, defended a free, Christian nation and won.  The poets, painters – painters and priests, who forge an independent alphabet language and deeply cultural identity.  Okay, that’s it here.

Then, on this side, mother Armenia with her child, showing how Armenia had risen from the pain of the 20th Century into a future of hope.  The alphabet, the arts.  Freedom, future.

Let me close by quoting another poet, a poem was his prayer, a poet with his poem, the poet, Paruyr Sevak.  Am I saying it right?  Sevak?  Or is it Sevak?

Speaker Pelosi.  Sevak.  Okay.  One of the greatest Armenian poets, whose likeness is depicted in this mural.  You got him?  Is he the one with the veil?

Man.  Right behind the priest in the white.

Speaker Pelosi.  Oh, behind the priest.  Oh, I see, I see.  Okay.  Keep your eyes on him right there.  This is what he said:

‘How did you manage that you, like a bee, extract nectar out of poison,

And out of bitterness, honey you even squeeze?

How did you manage to rise, after falling a thousand times?

And how did you manage to survive, after dying a thousand times?

What miracle made you not be extinguished as others before had done,

The flame never went off, but through long centuries kept on burning.’

Kept on burning.  Thank you, for this great honor of visiting your beautiful country and seeing how hopeful the flame of Armenia burns so brightly.  Let us take heed, come what His Holiness said, and what the great poet Sevak, portrayed here in this painting, has told us in poetry.  And as I said, sometimes the arts just have a way of reaching our hearts, as he did with this beautiful poem.  God bless them all, Armenia, God bless America, God bless all of you.

And now, I believe that we’re going to have some discussion among us so that I can learn from you.  I always learn more when I’m listening.  Thank you so much.