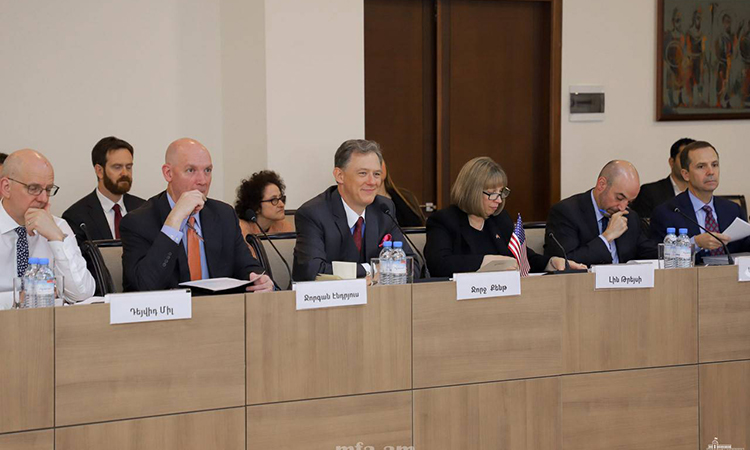 The Governments of the United States of America and the Republic of Armenia recommitted to strengthening their relationship during the U.S.-Armenia Strategic Dialogue (USASD), held in Yerevan on May 7, 2019.  Armenian Foreign Minister Zohrab Mnatsakanyan hosted the dialogue and Deputy Foreign Minister Grigor Hovhannisyan led the Armenian delegation, with participation by Armenian Ambassador to the United States Varuzhan Nersesyan.  The U.S. side was led by Deputy Assistant Secretary for European and Eurasian Affairs George Kent, with participation from U.S. Ambassador to Armenia Lynne Tracy and high-level officials representing the U.S. Agency for International Development (USAID) and the Department of Commerce, in addition to several State Department bureaus.

The USASD comes one year after the peaceful events of April/May 2018, which led to the election of a new Armenian government committed to democratic and economic reform.  The Armenian people voiced their desire to live in a modern, democratic country that respects the rule of law and is free from corruption.

During the USASD, the delegations discussed cooperation on strategic reforms and promoting shared democratic values.  Discussions also touched on global and regional security, law enforcement, assistance, and promoting mutual prosperity.  The delegations reconfirmed the mutual commitment of the United States and Armenia to deepening cooperation across all areas of the bilateral relationship.

During the meeting, the United States and the Republic of Armenia signed assistance agreements of up to $16 million to promote economic growth and good governance.  USAID further announced the launch of a new, 2-3 year initiative with $6 million dedicated for its first year of funding.  This new initiative will support the government of Armenia’s democratic reform agenda, promote citizen engagement, and help to deliver results for the Armenian people.

The Republic of Armenia and the United States also agreed on the importance of law enforcement and judicial reform, highlighting the U.S. Embassy’s International Narcotics and Law Enforcement programs and future opportunities for bilateral cooperation in this area.

The United States and the Republic of Armenia committed to increasing bilateral cultural and people-to-people ties.  The two countries will sign a memorandum of understanding to expand and support educational and professional exchange programs.  The U.S. side committed to expanding English-language training for Armenian students in rural communities across Armenia, and to establishing a Master’s degree program in American Studies at an Armenian university.