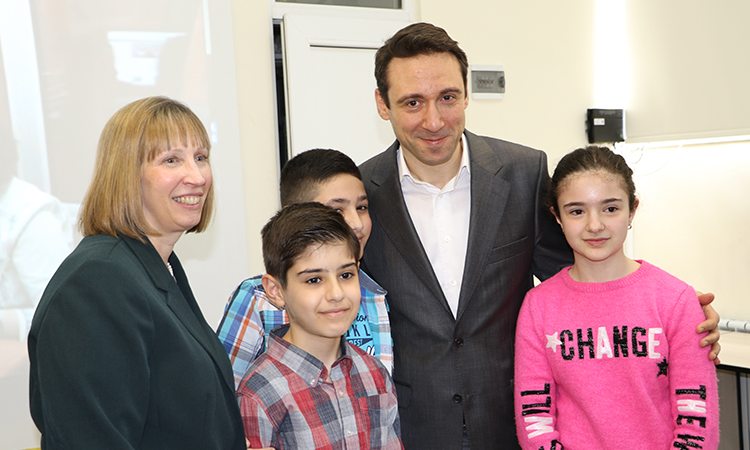 Today U.S. Ambassador Lynne Tracy, alongside the Mayor of Yerevan, HE Hayk Marutyan, officially opened TechnoLab – a new technological hub in Yerevan supported by the U.S. Embassy and the Isahakyan City Central Library.

TechnoLab is an extension of the Yerevan American Corner and is the result of the ongoing successful collaboration between the U.S. Embassy and the Yerevan City Central Library.

TechnoLab is equipped with computers, 3D doodlers and 3D printers, as well as coding and robotics kits.  Its purpose is to offer free access to new technologies and to offer the tools needed for the development of technological skills, particularly among young people.

TechnoLab will offer courses in coding and programming and training on the new technologies available in the center. Visitors may bring in their own devices and use them. Wireless Internet access is also available, and the facility is accessible for people with disabilities.  As in all the U.S. Embassy’s American Corners, all services and programs are free of charge.

In her remarks at the opening ceremony, Ambassador Tracy said, “The United States and Armenia share the view that STEM education is critical for our young people to succeed in our increasingly interconnected global society… It is my hope that this new TechnoLab will complement the current wave of enthusiasm for new technologies that is sweeping across Armenia.”

“This state-of-the-art technolab is yet another great example of successful partnership between the U.S. Embassy and Yerevan City that will make technology accessible for the patrons of this library. In addition, it will offer courses to people of all ages on use of technology. This is exactly what we want to as we are heading to elevate to a new level our traditions in advanced technologies and to offer new tools for education and development,” said Mayor Marutyan and thanked the Embassy for effective partnership.

The Yerevan American Corner was established in April 2005.  It is now one of five U.S. Embassy-sponsored American Corners across Armenia – in Gyumri, Vanadzor, Kapan and Charentsavan.  American Corners provide welcoming environments where visitors can connect and learn about the United States through programs and lectures, as well as through books, movies, and magazines.  They are platforms for providing information and engagement through activities, including: