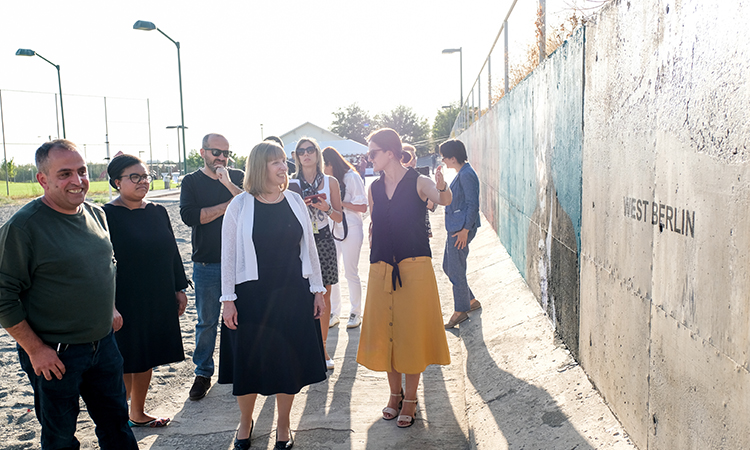 On September 25, 2019, the U.S. Embassy in Yerevan celebrated the completion of a project honoring shared U.S.-Armenian, transatlantic values, unveiling a 100-meter-long mural at the Embassy’s Gilmore Field.  U.S. Ambassador Lynne Tracy presided over the event, which was attended by young Armenian alumni of European and U.S. exchange programs as well as representatives of several diplomatic missions and Armenia’s Ministry of Foreign Affairs.

As the 30th anniversary of the fall of the Berlin Wall approaches, this project reflects the great symbolism inherent in that seminal historical event and harkens back to the “four freedoms” as articulated by President Franklin Roosevelt: freedom from fear, freedom of speech, freedom from want, and freedom of faith.  This artwork specifically highlights the impact of ongoing ties between Armenia and the United States, a point Ambassador Tracy emphasized in her remarks.

“The artistic concept of the mural reflects our shared values of peace, cooperation, and respect for human rights, and it underpins the United States’ longstanding and ongoing commitment to supporting the development of democratic processes and institutions in Armenia,” Ambassador Tracy said.  “This work gives us hope for the future, reminding us that barriers – literal and metaphorical – can be overcome and, if we put in the work, we can move toward cooperation and peace.”

Segments of the mural were inspired by U.S. artists Norman Rockwell, Robert Indiana, and James Rosenquist; the wall also features two historically significant quotes highlighting the “four freedoms.”  From renowned civil rights leader Ida B. Wells: “The way to right wrongs is to turn the light of truth on them,” and from President John F. Kennedy: “Not peace at the expense of freedom, but both peace and freedom.”

The project idea was proposed by a USG exchange alumna Tatevik Avetisyan and was designed in the graffiti style by contemporary Armenian artists Ara Petrosyan and Garik Yengibaryan.