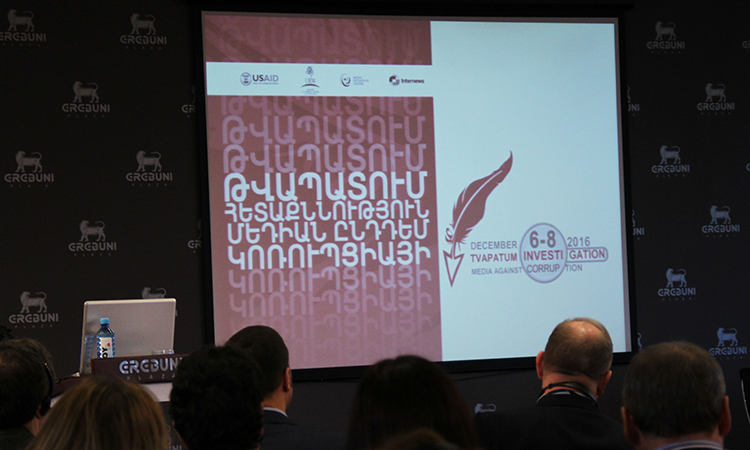 Ambassador Petrikas, Ms. Sarkissian, distinguished international guests, representatives of the local media industry, and conference participants: I am delighted to join you all here this morning.

This Friday, December 9, we will mark International Anti-Corruption Day. That day is an important reminder for everyone around the globe to reflect seriously on the cost of corruption, and provides us all with impetus to focus our efforts and attention on this global problem.

As you may know, last year I laid out the four main goals that I and the Embassy intend to prioritize during my tenure as U.S. Ambassador to Armenia.  One of those overarching goals is to partner with Armenia as it fights corruption. I firmly believe that corruption is not accepted as the default “way to do business” in Armenian culture and by the Armenian people, but it has managed to permeate many levels of Armenian society nonetheless.

Of course, corruption happens everywhere, including in the United States. The key questions for any nation are whether there is political will to attack corruption, whether the civil society feels empowered to speak out against corruption, and whether there are reliable judicial processes in place to investigate and prosecute the cases that are brought to light. And, maybe most important, whether there is a strong, vibrant, independent media ready to attack corruption. A media that has the knowledge, skills, and tools needed to investigate, uncover, and analyze where and how corruption occurs, and who is behind it, in order to bring pressure to bear on the perpetrators and help eradicate corrupt activities.

This conference is part of our partnership with Armenia, helping its media develop the skills and expertise it needs to help the Armenian people and government combat corruption. I am excited about this conference because it provides Armenian journalists and media professionals opportunities to talk and share experiences with a number of globally-recognized experts. Armenian journalists will learn that you have an international brotherhood of fellow reporters there to help, guide, share experiences, and listen to you as you investigate and report on corruption.

With heartfelt sincerity, I salute the brave journalists – those here in Armenia, those in the United States, in Lithuania, around the world – who are not afraid to go above and beyond to shine a spotlight into the dark corners where corruption thrives. Often these journalists face difficulties, challenges, even outright threats. But they continue to investigate, to burrow, and to report, knowing the importance of their work. I will add that independent, free and unbiased media coverage is critical if we want to curb corruption.

News outlets should be free to report the news without fitting into an official narrative, free to interview experts irrespective of political leaning, free to receive advertising dollars based on business decisions, not political pressure. Today, I join with our Armenian and Lithuanian partners to show our support for such an open and unfettered media environment in Armenia.

I would like to take this opportunity to once again acknowledge the great expertise that is gathered in this room and thank our Lithuanian friends for the collaboration with USAID and the Media Initiatives Center in bringing this important initiative to fruition. I trust that the conference will result in new collaborations and productive joint projects that would ultimately benefit the people of Armenia.

Question: Once you referred to the high level of corruption in Armenia and you mentioned that it’s a threat to National Security. What is the current government doing in that regard?

Ambassador Mills: I am very encouraged by what the Prime Minister has said so far about the priority he wants to put on fighting corruption. I think he is responding to what he is hearing from the Armenian people, from voices in Armenian journalism like yourselves, the corruption needs to be addressed. Corruption also needs to be addressed because it can prevent business investment, business growth in Armenia. And corruption can affect National Security because it can give corrupt business people, corrupt officials outside of a country, outside of Armenia, the ability to influence events inside Armenia. I think the Prime Minister knows all this and he is concerned about it. I have told him the U.S. Embassy, the U.S. government, stands ready to work with him in any way that we can help. One way we can help is by supporting conferences like this one today that is giving journalists the skills, the tools, to uncover corruption, to bring it to light, bring corruptions issues to the Armenian people’s attention. Let me just end by saying that journalists like yourself can only do so much, you can only bring corruption to light and then the government has to take actions against those responsible.  I just sat through a very interesting presentation by the editor of Hetq. And Hetq is an example of the kind of great investigative journalism that uncovers stories of corruption, some of which the editor went through. And now action has to be taken on the basis of what Hetq has uncovered in lots of these cases. And that’s what I think all of us, who are friends of Armenia, friends of the Armenian people, that’s what we want to see.

Ambassador Mills: I do not anticipate significant changes in the U.S.-Armenian relationship. Of course the new president will want to set out his own policies. He will have new advisors. He will look at Armenia, look at this region, with a new set of eyes. But for 25 years it has been the goal of every U.S. president – weather they were Republican or Democrat – to work to ensure that Armenia is prosperous, democratic, and at peace with its neighbors. And that goal for our relationship with Armenia – a prosperous, free, peaceful Armenia secure with its neighbors – I don’t think that will change. Our priorities will remain helping build trade and investment between the two countries, strengthening democratic institutions and transparency in Armenia, and of course, the most important thing I think for Armenia’s future, helping to work within the Minsk Group to find a peaceful negotiated solution to the problem, the issue of Nagorno-Karabakh’s future. I will just end by saying it will be my job, it will be the U.S. Embassy’s job, to make sure that the new administration hears from us about why the relationship with Armenia is important and why we need to continue a strong relationship. And the Embassy will be doing that over the next weeks and months