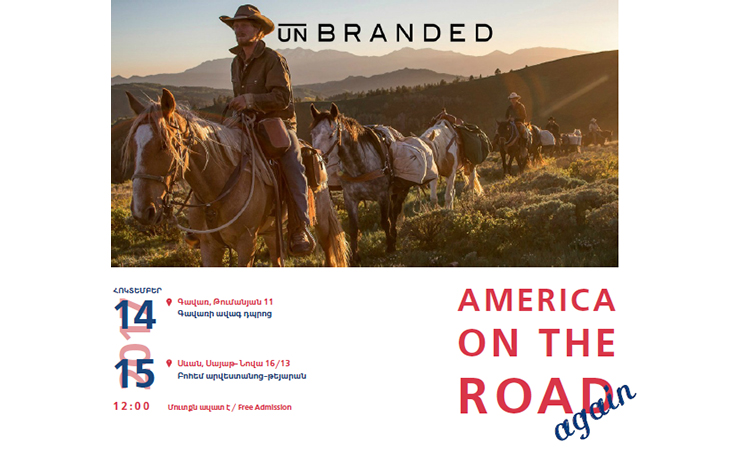 America on the Road Again Poster

The U.S. Embassy is once again headed to the regions, this time showcasing American film, dance, and literature in celebration of its 25-year anniversary in Armenia.  The cultural and partnership tour, called “America on the Road Again,” will kick off October 14 and run through the end of November.

“This summer we targeted larger regional cities with our ‘America on the Road’ tour,” said U.S. Ambassador to Armenia Richard Mills, Jr.  “This time we are visiting smaller towns that our diplomats do not often get to see.  We will offer film screenings, dance performances, and literary events to connect with our Armenian friends and partners and celebrate our shared love for culture and art, which unites us.”

One of the cornerstones of the “America on the Road Again” tour is a series of screenings of select U.S. documentaries and independent fiction films that were screened in Yerevan earlier this year through the American Film Showcase.  The films touch on important social issues like inclusion, diversity, and empowerment.

Film screenings will be held in Gavar (Oct. 14), Sevan (Oct. 15), Yeghegnadzor (Oct. 18), Gyumri (Oct. 20), Stepanavan (Oct. 21), Alaverdi (Oct. 22), Charentsavan (Oct. 28), and Abovyan (Oct. 29).  Two films will be shown at each stop:  A documentary and discussion with leading Armenian film experts for a select audience; and a feature film preceded by a discussion with an Armenian actor and a film expert.  All films are subtitled in Armenian and the screenings are free.

“These films explore important topics, such as raising a child with autism, while also providing an opportunity for spectators to practice their English,” Ambassador Mills noted. “And I think a love of film, a passion for cinema, is something that binds our two nations.”

The second wave of the “America on the Road Again” tour will include dance performances created as part of a project called “Unlimited Movement.”  The “Unlimited Movement” program is led by a group of U.S. government-sponsored exchange program alumni.  Through their performances, which feature dancers with disabilities, they promote the physical and artistic freedom for all individuals, including those with disabilities.

The two dance pieces being performed as part of the tour are “We,” described as a dialogue with society that raises all the questions we have about disability; and “Alice,” inspired by “Alice’s Adventures in Wonderland.”

From November 8 to November 14, several accomplished American authors will travel to Armenia for a series of workshops, lectures, and discussions on the power of the written word.  The group is being organized by the University of Iowa’s International Writing Program.  Traveling in the group will be Natashia Deón, author of, among others, the critically-acclaimed novel “Grace;” Lisa Schlesinger, an award-winning playwright; poet Michael Collier; writer Cate Dicharry; and Lavan Younger Poets Award winner Christopher Merrill.

From November 25 to December 3, New York Times bestselling author Sharon Draper will visit Armenia to launch the Armenian translation of her book “Out of My Mind,” a project funded by the U.S. Embassy.  The novel tells the story of a smart young woman born with cerebral palsy.  Since she cannot speak or move, she cannot communicate and must find a way to get the life she desires.

While in Armenia, Draper and Armenuhi Avagyan, professor of the Special Education Department at the Armenian State Pedagogical University, will lead discussions on the subject of inclusive education or people with disabilities for various groups of students, professors, and the general public.

“I think it fitting that this cultural and partnership tour ends with a focus on the written word,” Ambassador Mills said.  “Armenia often defines itself through its language and its amazing alphabet.  It takes pride in seeking out stories from other cultures, and of sharing its native tales with the world.  So I think it fitting that we wrap up this tour by sharing our passion for books and poetry.”