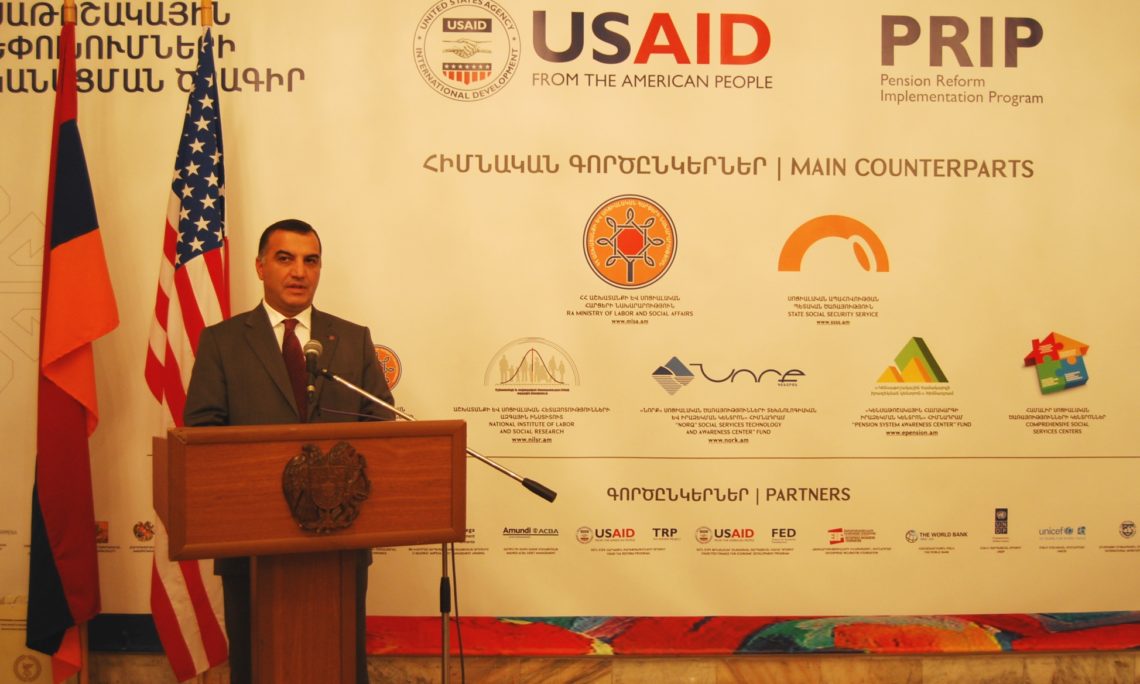 Yerevan, Armenia – More than 700,000 Armenians have access to an improved social safety net thanks to the USAID-funded Pension Reform Implementation Program (PRIP), which marked the completion of its activities on November 9. The four-year program worked with the Government of Armenia and local partners to make the country’s social protection system more efficient, transparent, and financially stable.

The improvements brought by the program support Armenia’s broader strategy to reduce poverty, strengthen social services institutions, and empower its citizens to exercise their social protection rights and responsibilities.

During the event marking the completion of the project, Minister of Labor and Social Affairs Artem Asatryan, USAID Armenia Mission Director Deborah Grieser, and John Thissen, Project Management Unit Director at Chemonics International (the partner that implemented the program), spoke of the project’s success.

In her welcome remarks, Director Grieser noted that the partnership between USAID and the Government of Armenia on this effort was geared towards tangible results and improvements in the sector. Thanks to this partnership, the government was able to increase pension benefits by 15% in 2014 and an additional 15% in 2015, with no additional cost to the budget.

“The introduction of modern technologies and the digitalization of the Ministry of Labor’s paper-based personal records have significantly improved record management and the transparency of Armenia’s social protection system, resulting in savings of many millions of drams for the state budget,” she said. “In addition, this modern system helps limit the opportunities for fraud and corruption.”

Over the past three and half years, USAID has used the reform effort to help the Ministry of Labor and Social Affairs integrate several databases into a single electronic platform, ePension, which makes social sector data more accurate and decreases the chances for corruption.  Through ePension, the possibilities for duplicate registrations and multiple payments to the same beneficiary from different social service offices have been removed.  Furthermore, the ePension system is now accessible in all of the integrated social services centers throughout Armenia.  As a result, citizens with ID cards can now conveniently receive services and social payments in more locations, without having to visit several government offices and present numerous documents.

Also through the project, the Ministry developed a centralized payment system for child care benefits, so families no longer face demands for bribes in order to receive child benefits.  The Government of Armenia has also digitized and archived paper-based personal records to secure electronic files against any unauthorized data alterations or transfers.

In an innovative approach to social reform, the program also helped the Ministry work with civil society organizations to ensure that beneficiaries of the social services system receive payments and services in an efficient manner. In fact, following the project’s implementation, a survey of about 500,000 pension beneficiaries found that 99% received timely payments and improved social services.

Another of the program’s accomplishments is the creation of the 114 hotline, which the Ministry developed with support from USAID and the World Bank.  The hotline initially addressed only pension-related questions but has since grown to accommodate a large volume of calls regarding all types of social issues, including disability allowances and family benefits.  A nationwide survey has revealed that Armenian families are highly satisfied with the 114 hotline.

Building on these successes, USAID will continue to work with the Government of Armenia on social sector reforms, including reforms that will help ensure social inclusion, improved welfare and better protection for children and other vulnerable groups.

“We applaud Armenia’s consistent progress in implementing social protection reforms and encourage the Government of Armenia to continue improving the transparency and accountability of the system to see even more results in the social protection area,” Director Grieser said.