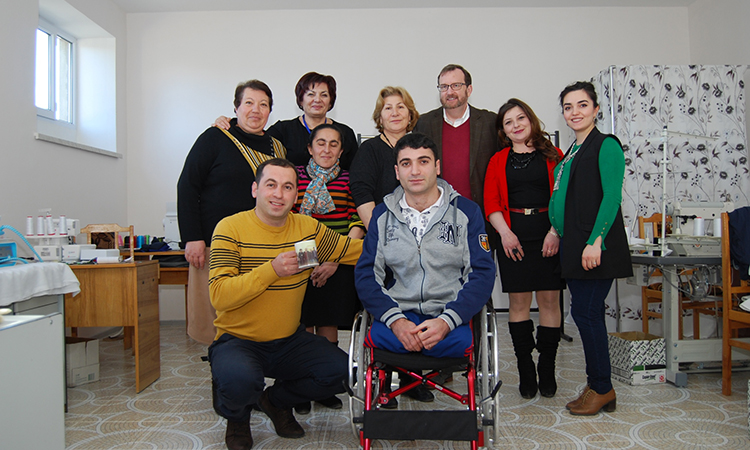 Yerevan, Armenia – To highlight the role women can and should play in the development of Armenia’s rural regions, U.S. Ambassador to Armenia Richard Mills, Jr. traveled to Gegharqunik on March 30 and met with female farmers, civic activists and civil society leaders – all beneficiaries and partners of USAID development efforts.

USAID promotes rural entrepreneurship in Armenia through several projects that recognize the potential of female entrepreneurs in boosting rural economies.  In Hairavank, Ambassador Mills met with female farmers who benefit from the community’s Farm Veterinary Service Center, established in 2015 through USAID’s Development of Private Extension Services System project.  The Center serves about 2,000 farmers from 10 nearby communities, promoting advanced agribusiness techniques and providing a range of services and supplies, such as animal disease prevention and treatment, and links to financial resources and the supply market. During the meeting, participants discussed the challenges and achievements of female farmers engaged in livestock and chicken breeding, as well as the production of meat, wheat, milk, eggs, and cheese.

In Gavar, Ambassador Mills visited the Geghareg NGO for a discussion with female activists in the community. Geghareg is a local partner of USAID’s Civic Engagement in Local Governance (CELoG) project, which supports the efforts of local civil society organizations to involve citizens in local governance issues and the ongoing territorial and administrative reform.  As part of the CELoG project, Geghareg works in four surrounding communities to increase civic activism and improve the dialogue between local governments and their constituents.

During a visit to the Martuni Women’s Community Council NGO (MWCC), Ambassador Mills met with USAID beneficiaries and discussed the role of women in civic activism and social entrepreneurship. The NGO is one of USAID’s local partners for the Civil Society Organization Development program, which helps build the organizational skills of Armenian NGOs.  The MWCC is home to the Martuni Infotun (information house), one of the eight regional multimedia hubs established by USAID to boost media literacy and the use of new media tools to engage citizens in community issues.

The Ambassador also toured the Ighdz (dream) social enterprise in Martuni, established in 2014 through USAID’s Livelihood Improvement through Fostered Employment for People with Disabilities project. The company employs 10 people with disabilities and is specialized producing household goods, garments, and uniforms for schools, medical clinics, and private companies.

Ambassador Mills emphasized the vital role women’s leadership and economic empowerment play in Armenia’s development: “I have met so many amazing Armenian women today – from farmers to civic activists and leaders. Each time I meet with groups of Armenian women entrepreneurs and community leaders I am impressed by their hard work, their ingenuity, and their accomplishments in the face of significant obstacles. Armenia’s women are one of the most important resources the country has. I am proud of the many ways the United States has helped to support these women as they work to make Armenia’s future brighter for all its citizens.”