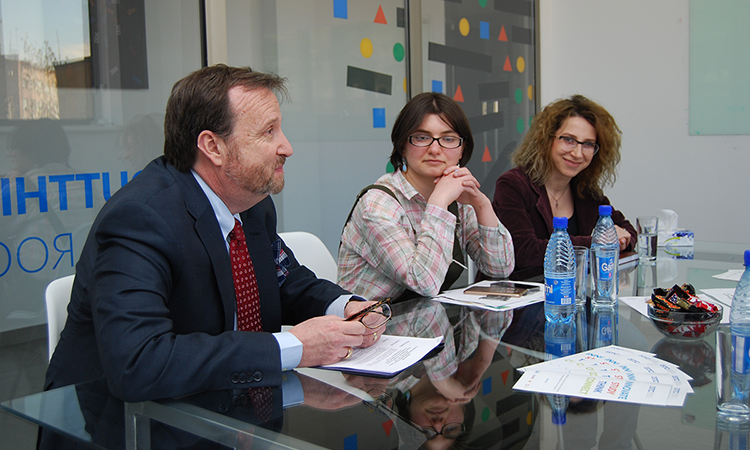 Yerevan, Armenia – Increased female employment offers great potential to Armenia’s economy. Currently, women constitute 67 percent of Armenia’s economically non-active population and their unemployment rate is almost double that of male unemployment (51.5 percent female vs. 21.8 percent male).  According to World Bank estimates, Armenia loses as much as 14 percent of its potential GDP due to unequal opportunities for women to participate in employment and entrepreneurship.  To highlight the importance of women’s leadership and economic empowerment in Armenia, on March 29 the U.S. Ambassador to Armenia Richard M. Mills, Jr. met with a group of female representatives from Armenia’s IT industry who have benefited from USAID assistance.

During the meeting, held at the USAID-supported Innovative Solutions and Technologies Center, Ambassador Mills discussed with the participants their career challenges and successes, and inquired about their ongoing projects.  “Too often, I’m afraid, the stereotype of a successful IT professional is still of a man.  But in reality, women play an increasingly important role in coding, product development, web design, and all aspects of IT work.  That is especially true in Armenia, as demonstrated by the wealth of talent and expertise gathered today in this room. You are a group of IT professionals, all women, who are working to boost Armenia’s economy through your creativity, problem solving, and technical knowhow.  I’m proud that the United States, largely through USAID, has been able to support you and help you fulfill your potential and your aspirations,” said Ambassador Mills.

USAID has supported female Armenian IT entrepreneurs through multiple activities, including the establishment of three innovative technology centers.  Working in partnership with the Armenian government, universities, and the private sector – including Microsoft, National Instruments, and IBM – USAID has established the Microsoft Innovation Center Armenia (www.micarmenia.am), the Armenian National Engineering Laboratories (anel.am), and the Innovative Solutions and Technologies Center (istc.am).  As one of the fastest growing sectors in the Armenian economy, IT presents a real opportunity for women to become leaders in innovation and to make major contributions to the country’s overall economic advancement.

Recognizing the need for gender equality and the vital role women play as drivers of economic growth, USAID has been promoting Armenian women’s participation in the economy for over two decades, helping them unleash their potential in areas that span from agribusiness and hospitality to textiles and IT.