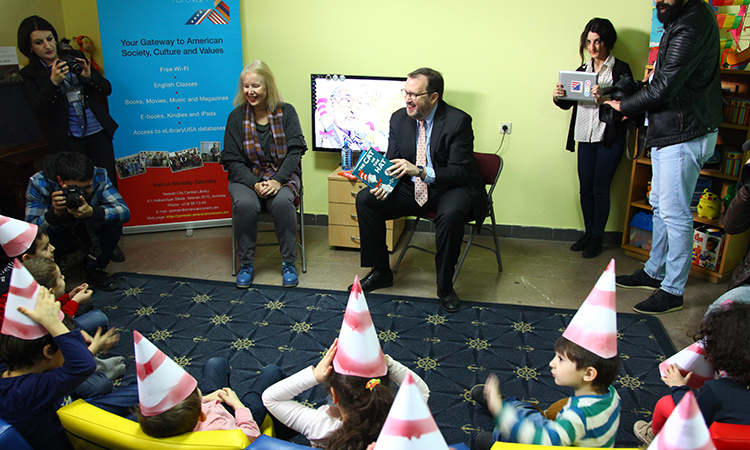 On March 2, U.S. Ambassador to Armenia Richard Mills, Jr., announced plans to expand the Yerevan American Corner during a ceremony in which he was presented with the Avetik Isahakyan Medal in recognition of his contribution to the development of the Yerevan City Central Library.

“While you present this award to me, it is important to note that I stand on the shoulders of many Americans and Armenians who over the years of our partnership developed the Corner into a vital and lasting bridge between our countries and our people,” he said as Library Director Hasmik Karapetyan presented him with the honor. “Together we ensure that the Isahakyan Library and the American Corner continue to be the first stop for thousands of students, teachers, and researchers who seek to broaden their knowledge, expand their views, and enrich their lives.”

“These are the resources Armenians need to develop their skills for the digital age. I am excited about this expansion of our Yerevan Corner, one of the most vibrant American Corners in the world,” Ambassador Mills said.

Since its founding in April 2005 as the first American Corner in Armenia, more than 210,000 people have visited the Yerevan American Corner to borrow books and magazines, conduct research online, get hands-on sessions with cutting edge technology, and improve their English by joining lectures, discussions, and debates.

The U.S. Embassy operates five American Corners in Armenia – in Yerevan, Gyumri, Vanadzor, Charentsavan, and Kapan. All their programs are free and open to the public. Details of their programs and events can be found here: http://www.americancorners.am/

March 2 was also the U.S. National Endowment for the Arts’ Read Across America Day, an annual effort to encourage young people to read. The day is the birthday of beloved children’s author Dr. Seuss. So, before the medal presentation Ambassador Mills joined several young American Corner patrons in reading one of Dr. Seuss’ classic books.

The U.S. National Endowment for the Arts encourages reading to children because research has shown that children who are motivated and spend more time reading do better in school.