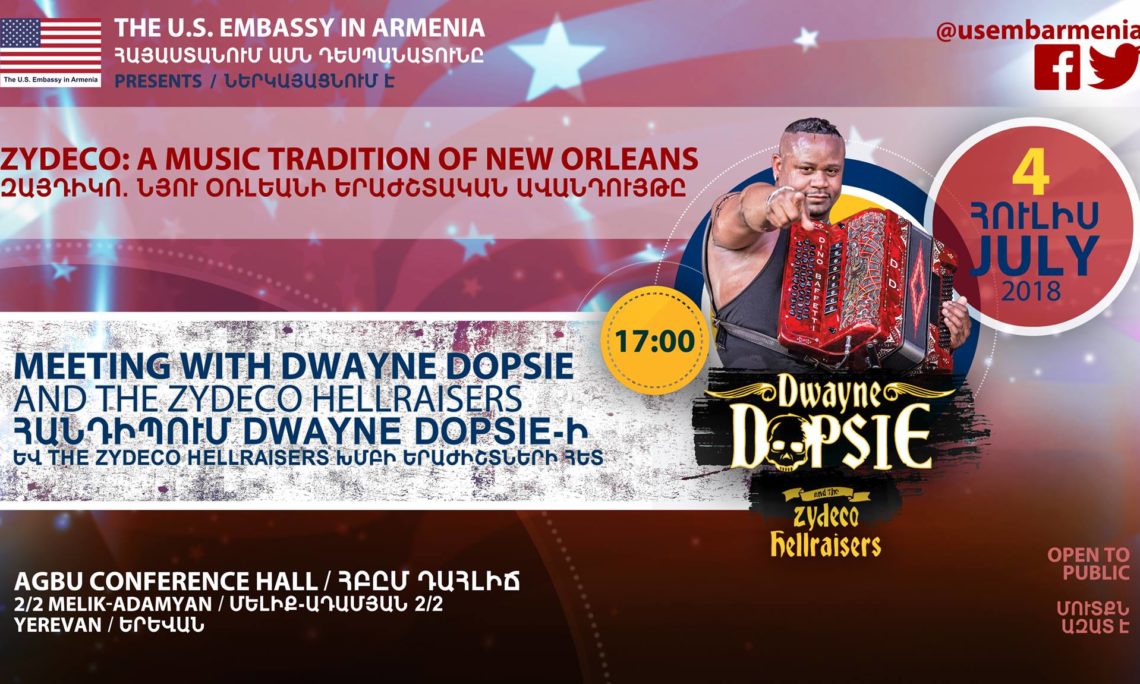 This year, the U.S. Embassy in Yerevan is celebrating U.S. Independence Day with a free, open-air concert at the Cafesjian Sculpture Garden on July 4th at 20:00 featuring the lively, unique sounds of Dwayne Dopsie and The Zydeco Hellraisers.

Zydeco is a type of music that evolved in the bayous of Louisiana, as the French Creole population’s traditions and cultures mixed with the blues and jazz born by the region’s African-American population. It is recognizable by its fast tempo, heavy use of the accordion, and its unique “rubboard,” a percussion instrument usually made from corrugated stainless steel and worn over the shoulders that is reminiscent of an old-fashioned laundry scrubbing board.

“In many ways I think zydeco is the spirit of America captured in music,” said U.S. Ambassador to Armenia Richard M. Mills, Jr., who was born in Louisiana. “It blends together different traditions, different sounds, different voices, to create something vibrant and energetic, something new and exciting. And that, to me, is what America does best.”

The Grammy Award-nominated Dwayne Dopsie and the Zydeco Hellraisers is led by “America’s hottest accordion” player Dwayne Dopsie, whose father, Rockin’ Dopsie, Sr., was a pioneer of zydeco music. Wining numerous awards, the band was nominated for a Grammy in 2018 in the Best Regional Roots Music Album category. They have performed in 20 different countries and are known for their high-energy, intensely powerful performances. Their performance in Yerevan is being organized with the support of the Cafesjian Center for the Arts.

To help Armenians better understand zydeco music, before the free public concert at the Cafesjian Scultpure Garden, the band will explain their music and unique instruments in a free public discussion July 4 at 17:00 at the AGBU building (2/2 Melik Adamyan St.). As with the concert later that night, the discussion is also free and open to the public.

Dwayne Dopsie and the Zydeco Hellraisers